Confemetal, ATA, Ceaje and Ganvam give their support to the candidacy of the Basque businessman. 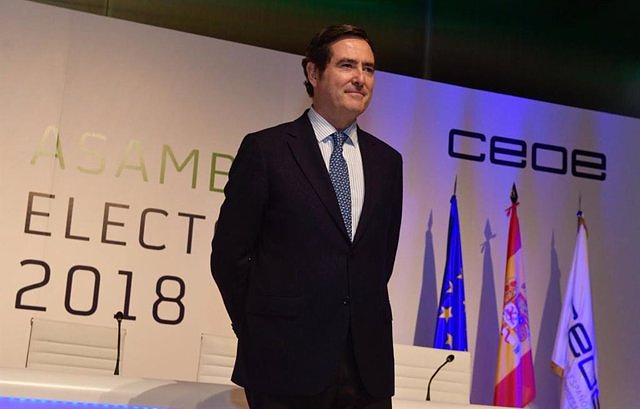 Confemetal, ATA, Ceaje and Ganvam give their support to the candidacy of the Basque businessman

The current president of the CEOE, Antonio Garamendi, has informed the Board of Directors this Wednesday that, after consulting the different employer organizations, he will opt for re-election to continue at the CEOE for another four years.

The Electoral Assembly in which the CEOE president and his management team will be elected will be held on November 23, as agreed by the organization's Board of Directors.

Several organizations have already expressed their support for Garamendi for a second term as president, including Confemetal, Ceaje, Ganvam and ATA. The latter has 24 members with the right to vote, the fifth largest number within the organization.

For its part, the Executive Committee of the metal employer Confemetal has unanimously approved to support Garamendi's candidacy for the elections. Confemetal is one of the most powerful organizations within the CEOE, as it brings together 74 associations, representing a number close to 220,000 companies from all activity segments of the industry, commerce and services of the metal sector.

From Ceaje, its president, Fermín Albaladejo, has highlighted in a statement that the work carried out by Garamendi in the last four years has been "irreproachable". "He has always been on the side of young people, sending his support and working with us to make Spain the best entrepreneurial ecosystem", he underlined.

Likewise, the National Association of Vehicle Sellers (Ganvam) has highlighted the capacity demonstrated by Garamendi to negotiate the implementation of flexible mechanisms that, in times of crisis such as those derived from the pandemic, allowed companies to maintain competitiveness and employment. companies in the vehicle sales and repair sector.

The employers' association led by Raúl Palacios considers that, at a time of profound transformation such as the one the automotive sector is undergoing and in the face of an economic context marked by uncertainty, "Garamendi represents the mediating and consensus-building capacity that the company needs".

Garamendi (Getxo, 1958) was elected president of the CEOE in November 2018 by acclamation of the Electoral Assembly, becoming the fifth president of the employers' association since its foundation (1977) after Carlos Ferrer Salat, José María Cuevas, Gerardo Díaz Ferrán and John Rosell.

The statutes of the employer's association have a limit of eight years (two consecutive terms of four years) the time in which the same person can remain in the Presidency of the organization, therefore, if he is re-elected and if the Statutes are not modified, it would be Garamendi's second and final term as president.

For now, everything points to the fact that the Basque businessman's candidacy will be the only one, as happened in previous employer elections. However, candidacies can be submitted up to 15 days before the Electoral Assembly, that is, until November 8.

The candidates for the Presidency of the CEOE must have the support of at least 20 members of the Assembly who, in turn, represent at least four full member organizations, without being able to support more than one candidacy.

The electoral period begins 40 days before the Assembly is held, at the moment in which each organization is informed of the number of representatives that it will be able to count on at the electoral appointment. In this case, this period covers until October 14.

Employer organizations will have until October 29 to appoint their representatives in the Electoral Assembly, which must be officially convened no later than November 3.

The appointment of the members of the Executive Committee, which includes the vice presidents, may be made on the same day of the Electoral Assembly (November 23) or later, but always before one month after the Assembly is held, in this case before of Christmas Eve.

‹ ›
Keywords:
CEOE
Your comment has been forwarded to the administrator for approval.×
Warning! Will constitute a criminal offense, illegal, threatening, offensive, insulting and swearing, derogatory, defamatory, vulgar, pornographic, indecent, personality rights, damaging or similar nature in the nature of all kinds of financial content, legal, criminal and administrative responsibility for the content of the sender member / members are belong.
Related News