The minister has asked this morning for candidates for the renewal after Lesmes' request that they reach an agreement. 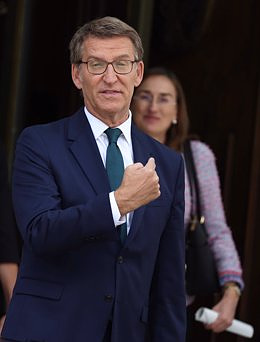 The president of the Popular Party, Alberto Núñez Feijóo, has today transferred to the Minister of Justice, who has asked for candidates to renew the CGPJ, that it is not about distributing names but about providing resumes with parameters of experience and independence, according to sources. 'popular'

Pilar Llop went to speak with the leader of the PP after the opening ceremony of the judicial year in which the president of the CGPJ and the TS, Carlos Lesmes, gave a harsh speech complaining about the situation in which the body finds itself of government of the judges for the lack of renewal for four years and for the law of the Government that prohibits him from making appointments to fill vacancies. Lesmes has called on Sánchez and Feijóo to meet and unblock the situation.

After speaking with the leader of the PP, the Minister of Justice has made statements in which she has urged him to propose candidates for the General Council of the Judiciary. Something that, according to 'popular' sources, he has also asked Feijóo during their conversation.

However, the top leader of the PP has told the Minister of Justice that it is not about "distributing names", but about the "curriculum and the parameters of experience and independence that future and possible candidates must meet".

In fact, this very morning, in an interview on Antena 3, before going to the opening ceremony of the judicial year, Alberto Núñez Feijóo has suggested "controlling a little the names" of those who have access to members of the Council, to "objectify" the curriculum of these and not put "the most similar or those who have made a sentence that interests me more".

In any case, the PP has shown the "maximum willingness" to sit down with the Government, address the reform of the Judiciary and the joint renewal of the TC and the CGPJ, but specifying that "under minimum requirements of independence", as the popular leader has affirmed in an informal conversation this morning with the journalists.

The 'popular' remember that the PP sent a proposal to the Government in July in search of said renewal and with the intention of reinforcing the independence of the judges and the State Attorney General's Office. And they reiterate that this document is the best basis for seeking an agreement that is acceptable and in line with the parameters set by the European Commission.

In addition, they say they agree with the president of the Council, Carlos Lesmes, in that the Government should not have "stolen" the CGPJ's powers when making appointments.