"The dead and wounded at the Melilla fence are a declaration of intent of how he understands human rights," he stresses. 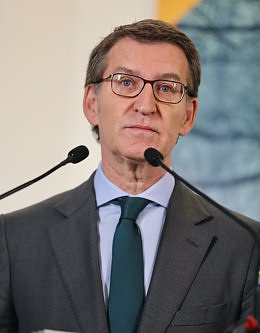 "The dead and wounded at the Melilla fence are a declaration of intent of how he understands human rights," he stresses.

The leader of the PP, Alberto Núñez Feijóo, has assured this Wednesday that the Minister of the Interior, Fernando Grande-Marlaska, should have resigned "weeks ago" and has denounced the "complicity" of the chief executive, Pedro Sánchez, for not stopping him when it has been "proven" that he "lied" to the Spaniards in relation to the tragedy in Melilla on June 24.

"The deaths and injuries that occur at the Melilla fence are a declaration of intent of how he understands human rights and how he understands the work that corresponds to the Minister of the Interior," Feijóo proclaimed, after an investigation by Several media outlets under the Lighthouse Reports consortium have indicated that at least one migrant died on Spanish soil in the Melilla tragedy.

When asked if the PP is going to register an investigation commission for the Melilla tragedy, after the minister has said that he is not going to resign, Feijóo has indicated that they are going to "listen" to Marlaska, who this afternoon appears before the Commission of Inside the Congress.

Having said this, he stressed that the latest images that have been released by this international journalistic investigation "prove that the minister has lied and that the Prime Minister" has also "lied" after assuring that this matter had been "well resolved". . "There is complicity between the Minister of the Interior and the President of the Government," he asserted.

The leader of the PP has insisted that the head of the Interior should have resigned "weeks ago" and if he does not, the chief executive should have fired him. In his understanding, the "problem is that the president is complicit in what he has done and what the minister has said." "But at least the minister should probably go to try that the president does not continue to erode as he is also in the areas of Interior," he added.

The head of the opposition has indicated that the government's actions in recent days are "a coven of events with a government on fire that does nothing more than put out fires that it itself causes." "And the problem is that the scandal on Monday is covered with a bigger one on Wednesday and the one on Monday and Wednesday is covered with the double scandal on Saturday. And this week after week," he emphasized.

Feijóo has stressed that, in addition to the economic crisis in Spain, there is an institutional crisis, with decisions that are "nonsense after nonsense". To this he has also added "discussions within the Government" and "videos recorded by the ministers to discredit another part of the Government." "What do we need more? Could there be a situation more surprising and more delusional than the one we are experiencing? Can we really hold out like this for another year?", He has wondered.

Feijóo believes that most Spaniards wonder "if this is a government or a circus." "And unfortunately, the majority of Spaniards are slowly realizing that this is a circus and that we have to elect the Government as soon as possible," he stated, adding that "unfortunately" the call for elections will be made "when interest the one who runs the circus" because he is the "only one who can" summon them.

"And of course, seeing what is happening in our country, I assure you that Spain is weaker from an institutional point of view and that Spain has a government and a policy that they do not deserve," he assured, to reiterate that " It is very worrying" that the country can "endure this circus for another year.

However, he has said that in five months there is a first date with the polls in the regional and municipal elections and there the Spanish have the "first opportunity" to say "enough is enough" and "this cannot continue." "And I hope that the majority of Spaniards, including many socialist voters, say this has to end," she said, sending a "very clear" and "very direct" message that it cannot continue like this.

‹ ›
Keywords:
FeijóoPedro SánchezPPMarlaska
Your comment has been forwarded to the administrator for approval.×
Warning! Will constitute a criminal offense, illegal, threatening, offensive, insulting and swearing, derogatory, defamatory, vulgar, pornographic, indecent, personality rights, damaging or similar nature in the nature of all kinds of financial content, legal, criminal and administrative responsibility for the content of the sender member / members are belong.
Related News