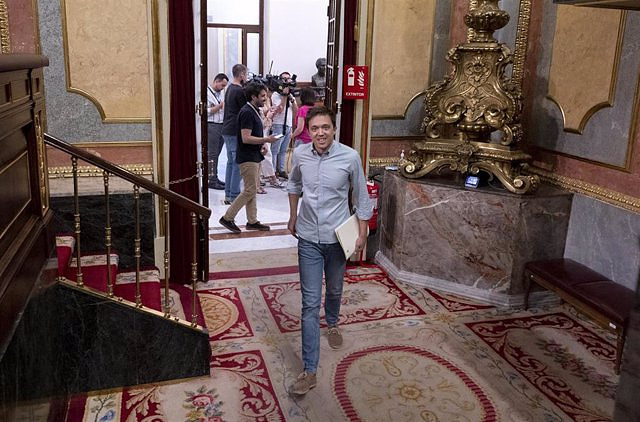 The leader of Más País, Íñigo Errejón, has also shown his suspicions regarding the intentions of the president of the General Council of the Judiciary (CGPJ), Carlos Lesmes, to threaten his resignation if the body is not renewed, when he has had practically four of expired mandate to resign.

He has also denounced the "authoritarianism" of the PP by keeping the governing body of the judges "kidnapped" at the "whim" of its leader, Alberto Núñez Feijóo, who does not respect the majority in Congress and the Senate in favor of undertaking the replacement of members in the institution.

At a press conference in Congress, the deputy has also defended that this situation makes reforms in the judicial field necessary and has once again vindicated his proposal to elect the members of the CGPJ by lottery and deploy a judicial MIR.

For Errejón, the controversial start of the judicial year as a result of Lesmes' speech makes "things clear" by assuming the fourth year that he pronounces it with an "expired mandate", an "anomaly" to which they have almost become accustomed.

In this way, he has compared that it would be "scandalous" and "unthinkable" for deputies to keep their seats in office for almost a legislature and has stressed that the blocking of the CGPJ does not respond to a parliamentary disagreement but is the responsibility of the PP, which behaves in an "unfair way" through an "institutional refusal" that cannot be allowed.

In this way, he has launched to the leader of the PP that this body is renewed according to the current majorities in Congress and in the Senate and "not because of its whims", since it exercises a "right to veto" that the PP undertakes only when it is in the opposition and that conditions the future of an institution to the "dictation of Genoa".

Meanwhile, he has admitted that he is suspicious of Lesmes' harsh speech and his threat to resign at this time, to add that he is unaware of the "calculations" and "interests" of the president of the CGPJ.

‹ ›
Keywords:
Íñigo ErrejónPPMás PaísCGPJ
Your comment has been forwarded to the administrator for approval.×
Warning! Will constitute a criminal offense, illegal, threatening, offensive, insulting and swearing, derogatory, defamatory, vulgar, pornographic, indecent, personality rights, damaging or similar nature in the nature of all kinds of financial content, legal, criminal and administrative responsibility for the content of the sender member / members are belong.
Related News