David Ferrer: "I am proud of the reception we have had in Valencia, good tennis will not be lacking" 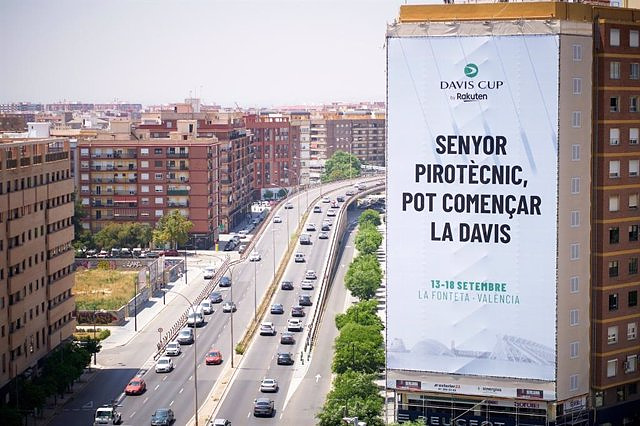 The tournament director of the Davis Cup by Rakuten Finals, David Ferrer, was "proud" of the reception the competition has received in Valencia, a city that will enjoy the "best tennis in the world", thanks to a new format "that has come to stay" with which "good tennis is not going to be missing"

"Playing the Davis Cup is always something different, the fact of feeling supported by your people, whether it is at home, makes it very special. It is a competition in which I have experienced the greatest emotions of my career2, Ferrer confessed during the presentation of the event this Thursday at the headquarters of the Generalitat Valenciana.

The group stage of the Davis Cup Finals will start next Tuesday, September 13, in Valencia, Bologna, Hamburg and Glasgow, in a format "that has come to stay". "All fans around the world have that margin to adapt to the calendar. In Spain we will have a very tough and difficult group, but at the same time good for tennis. Good tennis will not be lacking," he explained.

"Apart from being a historic competition, the fact is that you compete for your country, you have a team around you. You don't want to disappoint your team, you feel with an extra responsibility. You also play at home. The great reception we have had in Valencia since The first day makes me proud, people want to watch tennis and I feel very happy", Ferrer applauded during the ceremony.

For his part, the president of the Diputación de Valencia, Antonio Gaspar, who thanked the "immense work" of all the parties involved in a project that "is already a reality". "It is an international sporting event. There is no doubt that tennis is a trend, and Valencia is becoming a city that attracts talent. This event that begins next Tuesday has the ideal context to be held from conviction," he said.

"I am convinced that the city will be at the level that this competition deserves, the streets will have the aroma of good tennis. I am sure that we will all push for Spain to be in the final, also because of the drive from Valencia and its people," he concluded.

During his speech, the mayor of Valencia, Joan Ribó, recognized that it is "a pleasure" that the city is hosting this event. "We love these challenges, but we are mainly focused on popular sport, to promote the great positive values ​​of sport among the youngest. One of the best ways to stimulate this is the proximity of major events. Valencia is the perfect venue for this date with the best tennis players in the world"

"Its objective is to revitalize the local economy, always safeguarding public resources, as long as citizens benefit in some way. It is not the first time that we have hosted this competition and now it returns with a completely new format. All the teams will enjoy of extraordinary hospitality.

Ribó asked to enjoy "all the players who leave us speechless throughout the year" and who will now be at La Fonteta. "We trust that Valencia can be a talisman to lead Spain to new successes. I am sure that they will also enjoy a Valencia in which it is a pride to live and play tennis," he said.

Finally, the president of the Generalitat Valenciana, Ximo Puig, stressed that they are facing an "opportunity to see the best tennis in the world." "The Valencian Community loves tennis, we had already had a positive experience. It was already an issue that has to do with the Community's own idiosyncrasy. Thanks to tennis, a window is opened to explain what this land is. It is friendly and hospitable, and always open and committed to the values ​​of tennis", settled.

The Spanish team, captained by Sergi Bruguera, will face Serbia, Canada and South Korea in Group B, in search of one of the two places that will give access to the knockout stages of the final phase. Spain will debut against Serbia on Wednesday 14 September, will play their second tie against Canada on Friday 16 and will close the group stage on Sunday 18 against South Korea, always starting at 4:00 p.m., at La Fonteta and on a hard court under the ceiling.

‹ ›
Keywords:
Generalitat ValencianaCopa Davis
Your comment has been forwarded to the administrator for approval.×
Warning! Will constitute a criminal offense, illegal, threatening, offensive, insulting and swearing, derogatory, defamatory, vulgar, pornographic, indecent, personality rights, damaging or similar nature in the nature of all kinds of financial content, legal, criminal and administrative responsibility for the content of the sender member / members are belong.
Related News