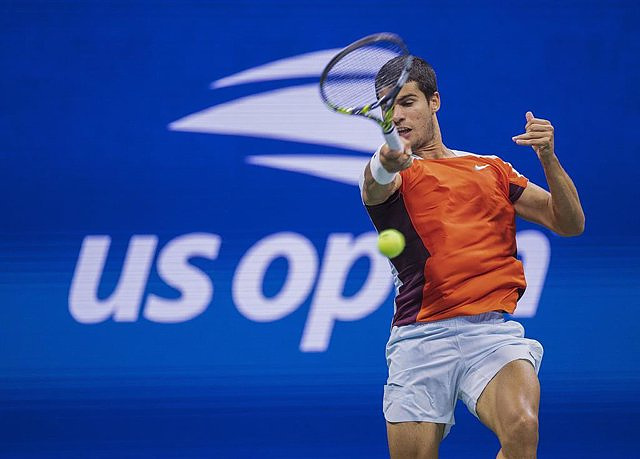 The Spanish tennis player Carlos Alcaraz will face this Friday the first semifinal of his career in a 'Grand Slam' when he faces the American Frances Tiafoe for a place in the final of the United States Open.

The fourth and last 'great' of a year has served to confirm the progression of the Murcian, right on the stage where he surely made the leap in quality last year. In fact, in 2021, when he was eliminated by Canada's Felix Auger-Aliassime, against whom he had to retire, he was looking to settle into the 'Top 50' and now plays at Flushing Meadows as the third seed.

The one from El Palmar is the one with the best ranking that has reached these semifinals, where in addition to the final prize, there is also the possibility of being the new number one. Alcaraz is fighting for both milestones with Casper Ruud and if he manages to reach the fight for the title and the fifth favorite, who will open the semifinals against the Russian Karen Kachanov, no, he would be the relief of the Russian Daniil Medvedev. If both reach the last match, the champion would be the new first classified in the ranking and if both lose, the throne would go to Rafa Nadal.

The Balearic is still in the race for this privilege despite being eliminated in the round of 16 by one of the revelations of this US Open. Frances Tiafoe is once again giving prominence to men's tennis in his country and after knocking out Manacor's tennis player quite well, he got into the penultimate round after knocking out Russian Andrey Rublev in three sets, without losing his serve and giving up only four breaking balls.

The American, who will have the support of the stands, will arrive somewhat fresher than Juan Carlos Ferrero's pupil, who will have to recover from the enormous effort of the more than five hours he needed to beat Jannick Sinner, in what was his second consecutive clash in five sets after the round of 16 against veteran Marin Cilic.

Despite the emotional effect that this victory has had, there is also wear and tear that will test the physical strength of the young 19-year-old player from Murcia, who is facing a great opportunity to win his first 'Grand Slam', but who will have to show the maturity and calm for it.

Tiafoe, twenty-second seeded and who has so far shown how to manage emotions and nerves, is at a high level and already against Nadal he showed that his service and his shots from the bottom line can hurt, although Alcaraz will propose a different challenge , for being another powerful server and having a powerful forehand.

At the moment, the Spanish tennis player arrives warned at his most important appointment in a year where he has already played six finals, with four titles, not only because of Tiafoe's level, but also because he lost in his only confrontation with the American, in 2021 and , curiously, on the theoretical 'worst' surface of this, the clay of the Count of Godó (6-4, 7-6).