CaixaBank foresees an impact of 450 million from the banking tax: "It is unfair and distorting"

"A sector is going to be taxed that is one of the least profitable in the economy". 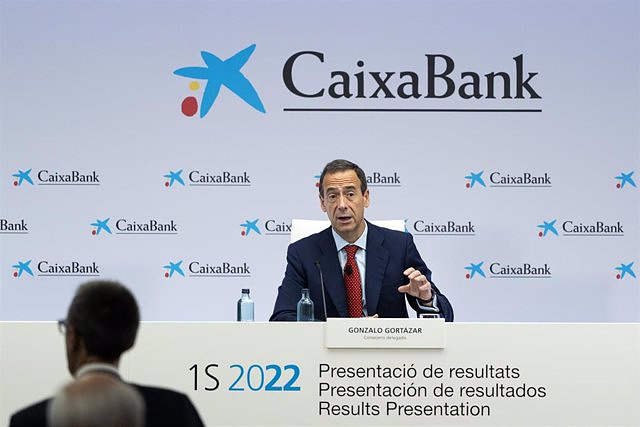 The CEO of CaixaBank, Gonzalo Gortázar, has branded the new banking tax "unfair, distorting and counterproductive" and has warned that they foresee an impact on the entity's accounts of between 400 and 450 million euros in 2023, that is, on the exercise of 2022.

He said it this Friday at the presentation in Valencia of the results of the first semester, that the entity has closed with an attributable profit of 1,573 million euros, 17.1% more than the same period of the previous year according to homogeneous perimeters and 23.1% more without extraordinary items associated with the merger with Bankia.

Gortázar, who has recalled that it is a non-deductible tax, explained that this impact comes from preliminary calculations, and that they still cannot project it for the second year of the tax.

For him it is an "unfair" tribute, because it is proposed on the basis that the sector has extraordinarily high results, something that he considers "not true", and he has recalled the low profitability of the sector.

"Of 35 Ibex companies, 11 are listed below their book value, of which 5 are banks. They are in the bottom line of profitability. We cannot propose a tax on extraordinarily high profits because they do not exist," he said.

And he added: "The financial sector starts from very low returns and that is why it does not seem appropriate to me that the financial sector be taxed: the profitability of the sector is 5.37%: it is very low. That means that the entire sector is listed for below the book value on the stock market, and investors see that it will not change in the future either. We are going to tax a sector that is one of those with the lowest profitability in the economy".

Likewise, he has branded the tax as "distorting" competition, because he considers that it will not affect everyone equally, since only entities with more than 800 million euros will have to face it, while there are local entities and foreign banks that do not reach that threshold.

And he has referred to the investment funds: "Are we going to let them be more competitive to finance our companies in Spain because they do not have that tax?", he added.

He also believes that it distorts the European banking regulations, because the tax prohibits its passing on to customers, when the European regulations of good banking practice ask that all costs be passed on when making the new credit production, such as those of capital, of financing, operating and credit, as well as those of a tax nature.

"What is coming to us is a Spanish regulation that says exactly the opposite. As a country, we cannot afford to go against European regulations, and of course it puts supervisors in an impossible situation," he warned.

He has also said that, as a consequence of the need to pass on costs in the generation of credit, there are two options: either the sector passes on it and pays attention to European regulations and credit becomes more expensive, or it does not pass it on and therefore Therefore, on many occasions it will stop giving that credit: "We will have either more expensive credit or less credit."

For Gortázar, the measure is also "counterproductive" because crises have shown that, when they have occurred with a strong financial sector, the impact has been "less strong and lasting."

"We are facing a much more difficult economic environment, and weakening the financial sector as the first step is simply counterproductive," he concluded.

In fact, Gortázar has explained that CaixaBank is a very large entity and, therefore, with great benefits, something that he has defended due to the fact that it can finance investments of billions.

"We don't want to be in the hands of foreign capital. Creating large entities like us and some others in Spain is very good, but if you have created it, it will make a lot of money: if you have 50,000 million, you have 700,000 shareholders and each of the which has contributed a part and needs a return, the return is very large", he argued.

For this reason, he has called for promoting large companies and not penalizing them, and has insisted that they have earned more than 1,500 million, but with a ROTE of 7.9%, something that, compared to the rest of the Ibex companies, puts the tail sector.

"We cannot be guided by large numbers, because then we will have small companies", and added that the industrial fabric of Spain must have great champions to face other types of challenges.

‹ ›
Keywords:
Sector FinancieroCaixabank
Your comment has been forwarded to the administrator for approval.×
Warning! Will constitute a criminal offense, illegal, threatening, offensive, insulting and swearing, derogatory, defamatory, vulgar, pornographic, indecent, personality rights, damaging or similar nature in the nature of all kinds of financial content, legal, criminal and administrative responsibility for the content of the sender member / members are belong.
Related News