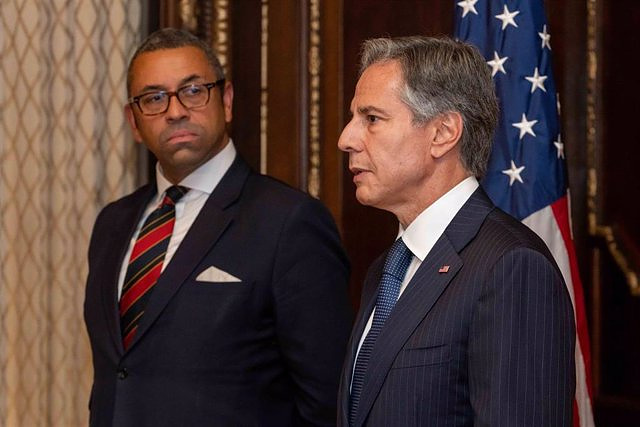 The Secretary of State of the United States, Antony Blinken, held a meeting on Tuesday with the Foreign Minister of the United Kingdom, James Cleverly, in which they discussed the challenge posed by the reactivation of the nuclear agreement with Iran.

Blinken and Cleverly, who had a conversation in New York - where the UN General Assembly is being held these days - discussed "the state of efforts towards a mutual return to full implementation of the Joint Comprehensive Plan of Action and to counter Iran's malign activity.

The diplomatic process, sponsored by the European Union, seeks to restore an agreement that, although it is still in force, is badly damaged after the United States unilaterally withdrew during the Donald Trump period. Iran, for its part, breached agreed limits on its nuclear activity.

However, Tehran asked weeks ago for "stronger guarantees" from Washington for the reactivation of the 2015 nuclear agreement, while stressing that one of the conditions for return is that the International Atomic Energy Agency focus "only in their duties and responsibilities.

Meanwhile, the United States has rejected these requests, calling the response "unconstructive" and has assured that it will formulate its own response. For the EU, the proposal put on the table by Borrell on August 8 is a final document that the participants in the nuclear agreement must sign or reject, after a 17-month process of talks, mainly in Vienna.

‹ ›
Keywords:
Reino UnidoEstados UnidosIrán
Your comment has been forwarded to the administrator for approval.×
Warning! Will constitute a criminal offense, illegal, threatening, offensive, insulting and swearing, derogatory, defamatory, vulgar, pornographic, indecent, personality rights, damaging or similar nature in the nature of all kinds of financial content, legal, criminal and administrative responsibility for the content of the sender member / members are belong.
Related News