Barça shipwreck in its premiere against Rayo. 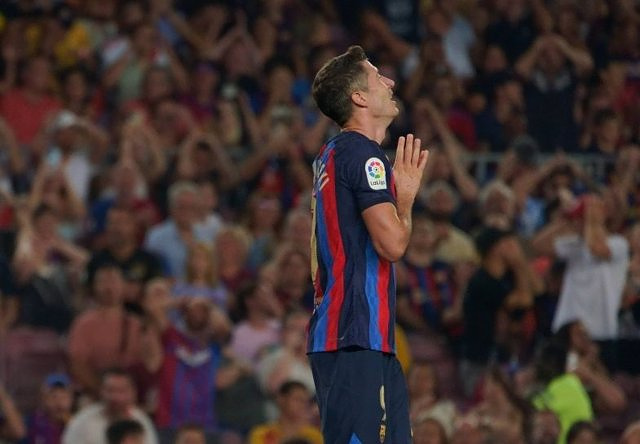 FC Barcelona could not (0-0) with Rayo Vallecano this Saturday in its debut in LaLiga Santander held at the Spotify Camp Nou, a jug of cold water for the illusion that the renewed Barça team brought, without aim and even energy at final.

Xavi Hernández's team took the first in the forehead, although it is only the first. Rayo got away with it for the third time in a row against their prestigious rival, with two 1-0 wins and now this draw, proving to be a mature and serious team.

The Madrid team was not intimidated by the squad of new stars that Barça was finally able to line up, with all the signings registered the day before except Kounde, and they repeated the feat. Robert Lewandowski, Rapinha, Dembélé, Ansu Fati and Aubameyang had at least one good opportunity to have blessed the debut.

More than twenty shots were made by the culé team for the visiting half dozen and yet Rayo could have had the two clearest, forcing Ter Stegen. Barça was overcome by anxiety, perhaps due to the need to win and win, after a blank year and the financial effort of the club this season.

Rapinha and Dembélé gave the Catalans amplitude and overflow, but Rayo did not break down at any time. Iraola's men were firm at the back and managed the moments of overwhelm without suffering excessively. Lewandowski was slow to appear, but his first warning was an offside goal. The Vallecas team took pains to cut off the wings of Pedri and Gavi with a great match by Pathé Ciss and, in that game on the wings, Barça did not have a free shot.

After 20 minutes the local chances began to be serious, from the former Leeds player and on the other side of the Frenchman, with Rayo locked up for many minutes but well positioned. Before the break, Álvaro García left that clear for Iraola's men that Ter Stegen stopped. Against all odds, Barça had no continuity in the second half and Camello added another chance for Rayo, who miraculously did not enter.

Seeing the panorama, Xavi pulled the wide bench that this time he does have. Ansu Fati and De Jong gave good results, but with the Spanish international also failing. The Dutchman gave the ball to a Barça that was beginning to see ghosts with the fringe. In the last arreón, the Barça team also forgave. Lewandowski, who requested a penalty, Kessié, another annulled, and Aubameyang, who took the ball from him under Catena sticks, brushed the goal.

On the other side, Falcao also saw the net offside already in the long discount, when Busquets saw the second yellow card and Kessié bothered his ankle. Undoubtedly a debut far from the dream for the new stage of Barça, in need of joy to give confidence to a team to do. Rayo has his own much clearer.

‹ ›
Keywords:
Fútbol Club BarcelonaSpotify
Your comment has been forwarded to the administrator for approval.×
Warning! Will constitute a criminal offense, illegal, threatening, offensive, insulting and swearing, derogatory, defamatory, vulgar, pornographic, indecent, personality rights, damaging or similar nature in the nature of all kinds of financial content, legal, criminal and administrative responsibility for the content of the sender member / members are belong.
Related News