Alcaraz and Nadal, at the top of the world ranking

The Murcian continues as number one in the world and the Balearic ascends to the second step of the ranking. 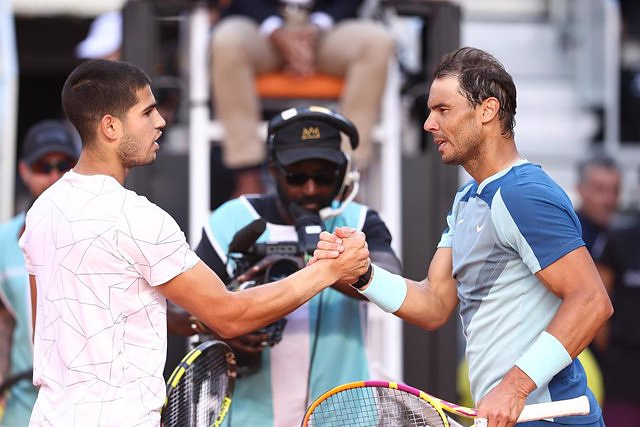 The Spanish tennis player Carlos Alcaraz remains number one in the ATP ranking, ahead of a Rafa Nadal who rises to second place, with the two national players at the top for the first time in history, while 22 years ago two Tennis players from the same country did not achieve this feat, when in 2000 the Americans Andre Agassi and Pete Sampras did.

For the first time in the history of Spanish tennis, two Spanish players will occupy the first and second positions in the ranking, a fact that occurs thanks to the fact that the Japanese Yoshihito Nishioka eliminated the Norwegian Casper Ruud in the quarterfinals of the Seoul tournament ( South Korea), causing it to drop from second to third place. This benefited Nadal, to move up a position and complete this feat.

Alcaraz continues at the top of the table after his triumph at the US Open, his first 'big' in his career, while his last match was in the Davis Cup Group Stage, when he beat Korean Woo Soon Kwon to participate in the advancement of Spain to the Final Phase of Malaga. For his part, Nadal has not played since Roger Federer's farewell in the Laver Cup, after falling in the second round of the 'Grand Slam' in New York.

This milestone puts the finishing touch to a brilliant season for Spanish tennis, after Nadal won the Australian Open and Roland Garros and Alcaraz lifted the US Open. Two national tennis players have won three of the four majors, in a year in which Spain has celebrated 14 singles titles in the men's circuit and one more in the women's, as well as six in the doubles category.

This week Spain presents up to six tennis players within the 'top50' of the men's team. In addition to those already mentioned, Pablo Carreño is still in the 'top20' (15), with Roberto Bautista in 21st place. Alejandro Davidovich drops two places (31) and Albert Ramos remains in 40th.

Without big prizes this last week, the Serbian Novak Djokovic, who won the Tel Aviv tournament and is close to 90 individual titles, does not rise to any position and remains seventh. Within the 'top10', the Italian Jannik Sinner, who did not defend his title in Sofia last year, and leaves the club of the ten best at the moment, now occupying that tenth place is the Polish Hubert Hurkacz.

In the women's draw, the Polish Iga Swiatek continues to lead convincingly, with the Spanish Paula Badosa falling to fourth place and the also national tennis player Garbiñe Muguruza descending to thirteenth place, still outside the 'top 10'.