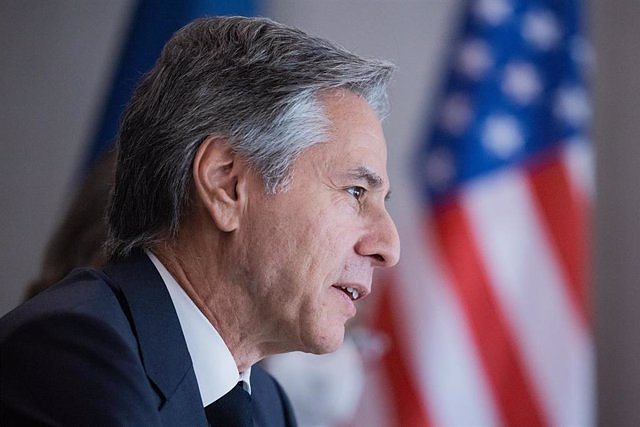 The United States government has announced the imposition of sanctions against Iranian entities for the delivery of drones to Russia and Tehran's "support" for the "unprovoked war" launched in February by Moscow against Ukraine.

The US Secretary of State, Antony Blinken, has indicated that the drones delivered by Iran "are being used by Moscow to attack civilian infrastructure and cities" and has stressed that among those sanctioned are "manufacturers" and those responsible for sending these devices.

Thus, he has indicated that among those sanctioned is the Iranian Revolutionary Guard Aerospace Force, which he says "probably helped facilitate the supply of military drones by Iran to Russia," according to a statement published by the State Department. .

In this sense, he has revealed that the latter company produces, among others, the Shahed-136 drone, "used by Russian forces in their recent attacks against kyiv, Odesa and the Kharkov region." The European Union (EU) and the United Kingdom announced sanctions against the company in October.

On the other hand, Blinken has announced the designation of the Wagner Group, owned by an oligarch close to Russian President Vladimir Putin, for "operating in the defense and related material sector of the economy of the Russian Federation."

In this way, he recalled that the Wagner Group was already the target of previous sanctions and added that "earlier this year it tried to buy Iranian drones, almost certainly to support its operations in Ukraine, which is an example of how it is used by the Kremlin as a low-cost, low-risk instrument to advance its objectives".

The Treasury Department has also announced sanctions against two individuals identified as Abbas Djuma and Tigran Kristoforovich Srabionov for "being involved in the Wagner Group's acquisition of Iranian drones to support its combat operations in Ukraine."

The sanctions also affect United Arab Emirates (UAE)-based Success Aviation and Jet Global DMCC for their role "in the transfer of Iranian drones to Russia for use in Ukraine." "Actions against targets in the UAE are taken in cooperation with the Emirati government," the State Department has specified.

"The Iranian government's military support for Russia fuels the conflict in Ukraine and its delivery of drones is a clear violation of United Nations Security Council resolution 2231," he denounced, before stressing that "the United States will continue working to alter and defer these transfers and impose costs against actors who participate in this activity".

‹ ›
Keywords:
Estados UnidosRusiaIránUcraniaDrones
Your comment has been forwarded to the administrator for approval.×
Warning! Will constitute a criminal offense, illegal, threatening, offensive, insulting and swearing, derogatory, defamatory, vulgar, pornographic, indecent, personality rights, damaging or similar nature in the nature of all kinds of financial content, legal, criminal and administrative responsibility for the content of the sender member / members are belong.
Related News