85% of Colombians support the resumption of dialogue with armed groups 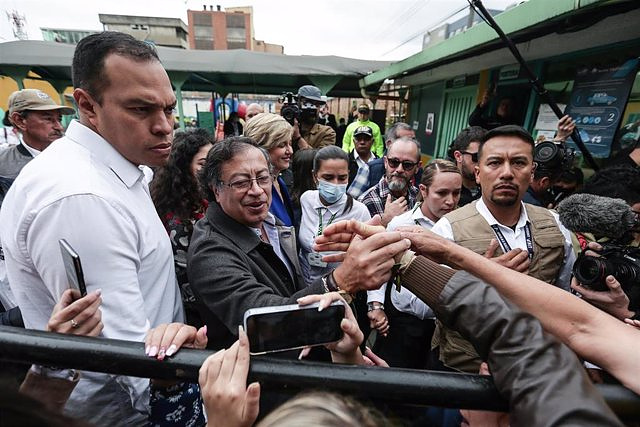 85 percent of Colombians support the "total peace" law put forward by Colombian President Gustavo Petro, which allows the country's government to promote peace talks with armed groups to negotiate with them and try to demobilize them, according to a survey by the pollster Cifras y Conceptos.

Specifically, the sectors that most support the measure are people declared to be from the left (97.2 percent support) and from the center (85.9 percent). However, the measure is also approved among those who declare themselves to be on the right, although to a lesser extent (57.4 percent).

In this way, the majority of Colombians express their support for the negotiated path and for peace over other strategies to put an end to armed groups and violence in the country. This has been a constant in the surveys in recent years, according to the Ideas for Peace Foundation.

With respect to whether the living conditions of the community will improve with the negotiations, Colombian citizens are somewhat more optimistic: 29 percent firmly believe so, 43 percent consider themselves neutral, and 25 percent say no.

Meanwhile, Colombians have preferences regarding which armed groups they should dialogue with and which ones they should bring to justice, according to the aforementioned survey.

59 percent of citizens advocate dialogue with the National Liberation Army (ELN), compared to 34 percent who prefer to take them to court. Regarding the dissidents of the Revolutionary Armed Forces of Colombia (FARC), 43 percent prefer dialogue compared to 49 percent who want the legal route.

With the Clan del Golfo, 37 percent of Colombians prefer dialogue, compared to 55 percent who would like legal proceedings.

In this sense, 47 percent of those surveyed have shown themselves against pardoning the young people who make up the first line of the guerrillas, compared to 45 percent who would grant them pardon.

The president of Colombia, Gustavo Petro, proposed during his electoral campaign for the Presidency to implement a "total peace" that would promote the start of peace talks with armed and political organizations and end "the bloodbath" to which he would have been subjected. the country for more than 50 years.

After its approval in Congress and the Senate, the Colombian Executive began last Monday in Caracas peace talks with the guerrillas of the National Liberation Army (ELN). In a joint communiqué, both parties assured that they were willing to "build peace based on a democracy with justice."