The defendants in the Alquería case, alleged irregularities to favor PSPV and Compromís, insist on their innocence

Former manager Brines: "I hope this bad dream that we have had to live disproportionately and for no reason ends". 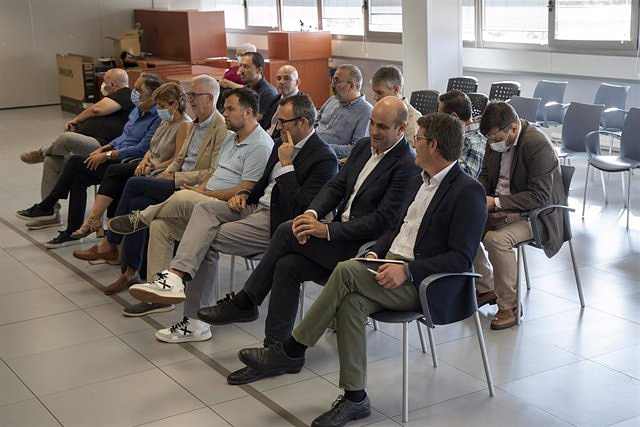 Former manager Brines: "I hope this bad dream that we have had to live disproportionately and for no reason ends"

Most of the 14 defendants in the Alquería case – regarding allegedly irregular contracts of senior managers in the public company Divalterra to favor the PSPV and Compromís – have wanted to have the last word in the trial that is taking place against them in the Court of Valencia and have taken the opportunity to insist on their innocence, while they have lamented the damage that this procedure has caused them at a personal, family, work and economic level.

The first defendant to refer to the court was the former president of the Provincial Council and current mayor of Ontinyent, Jorge Rodríguez, who only wanted to adhere to what was stated by his defense throughout the hearing sessions and thanked him for his work.

For his part, the one who was Rodríguez's chief of staff in the provincial corporation, Ricard Gallego, has also thanked the work of his lawyer and has expressed his hope that the trial will serve to guarantee his innocence.

The former Divalterra lawyer-advisor, Jorge Cuerda, has alluded to all the personal and professional damage that this procedure has caused him. "Nothing like this had ever happened to me," he asserted. "On a personal level, everyone handles it in a different way, but there is a shock wave that reaches family members. Professionally, the case has destroyed all my previous professional prestige, if I had it," he stressed.

"The procedure - he added - has caused me a lot of damage in terms of the decreed secrecy. There was a constant expression that 'there will be something'. I am a career civil servant and everything has been charged. Why? Due to a complaint, an instruction that was not carried out as it should have been carried out. I am innocent and what I did is not criminal. I would like an acquittal and for this to end now."

For her part, the ex-manager Agustina Brines, visibly moved, has revealed the "evil" that has been caused to her with this cause, both on a personal, family or professional level: "No one will cure this anymore." "I hope that this bad dream that we have had to live disproportionately and for no reason ends once and for all," she highlighted.

Another former manager, José Ramón Tíller, has highlighted: "In my time as co-manager at Imelsa I always acted respecting the law and I am proud of the work I did".

Another former senior manager at Divalterra has asserted that the defendants are "playing a lot" and has added: "I cannot understand how a person hired like me, who has fulfilled the contractual functions and obligations, ends up charged in a case like this with all the personal, family, work and economic consequences. The only explanation is that it is a necessary side effect to magnify a case mediated by the presence of politicians," he criticized.

The last of the defendants to use his last word in the trial, also an exalted position, has regretted that he found out about his accusation in the procedure through the press and has highlighted the "shock" that it caused him at a work and personal level: "I have two daughters and they ask them what their father has done. These things have a huge impact," he said, to add: "I don't really know what I'm doing here. The Council appointed me and I carried out the entrusted tasks with loyalty."

Rodríguez faces eight years in prison, as claimed by the accusations - Prosecutor's Office, Civic Action and PP -, while his defense requests acquittal since he did not see any crime.

The accusations also request eight years in prison for Ricard Gallego, who was Rodríguez's chief of staff in the provincial corporation, for the adviser Manuel Reguart (both for necessary cooperation) and for the two former managers of the public company Divalterra, Agustina Brines. (for Compromís) and José Ramón Tiller (for the PSPV) for crimes of administrative prevarication, embezzlement of public funds and falsification of an official document.

In addition, the prosecutor asks for the seven people hired as senior management charges six years in prison: one for document falsification and five more for embezzlement for necessary cooperation; and another six for Divalterra's lawyer-advisor, Jorge Cuerda, and another manager, Xavier Simón, for falsehood, embezzlement and prevarication.

‹ ›
Keywords:
Compromís
Your comment has been forwarded to the administrator for approval.×
Warning! Will constitute a criminal offense, illegal, threatening, offensive, insulting and swearing, derogatory, defamatory, vulgar, pornographic, indecent, personality rights, damaging or similar nature in the nature of all kinds of financial content, legal, criminal and administrative responsibility for the content of the sender member / members are belong.
Related News