The territories for now are abstracted from the conflict and regional leaders of the party attend acts of the Díaz platform. 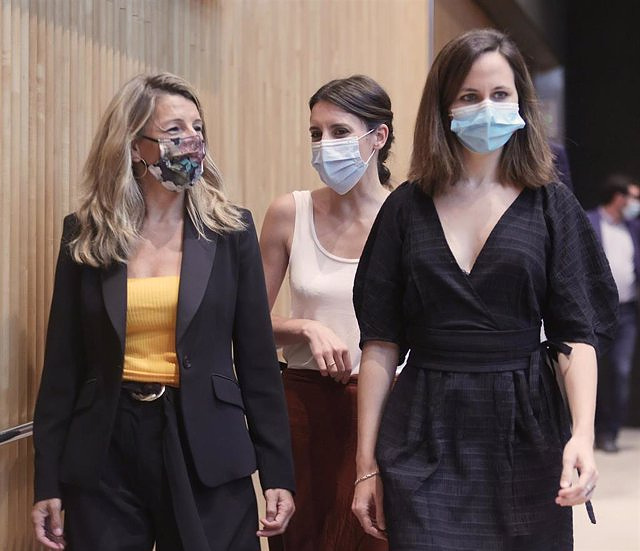 The tensions between Podemos and the second vice president, Yolanda Díaz, have shaken various sectors of United We Can with calls to reconcile the relationship and complaints about the lack of definition that the Sumar platform entails for the reconfiguration of the left.

This is how various sources from the confederal space express it, who do not hide their concern for the situation generated, which, however, does not transfer to the territorial area where the acts of Sumar have been carried out with the presence of representatives of the purple party.

The 'Autumn Uni' has closed with a rearmament of the party and the demand for respect for Podemos, verbalized by its former leader Pablo Iglesias and the co-founder of the party Juan Carlos Monedero, at the time of converging with Sumar have shown a discrepancy that, for various sources in the confederal space, it dates back a long time but was buried.

For her part, the head of Labor has avoided responding directly to the former vice president but has claimed that Sumar is "unstoppable" and "is not anyone's complement" and that it is made with "patience".

Within the confederal space, they interpret that the purple party has been reinforced during these days, seeing that the event has been successful in terms of attendance, and that in that environment they have launched that warning: Podemos continues to be the hegemonic force of the left.

Precisely this week, the former leader of Podemos shared information about the intention to vote that Podemos continues to have on Sumar or IU, reaffirming that "humility, generosity and respect" on the part of the allies was a condition for the success of the left .

"Without generosity there is no left. And a lot of reciprocity is missing," Monedero also stated on networks, who stressed that Díaz "accepted to be vice president and represent the space that Podemos built." "His obligation is to represent the entire space. And to do so, it is incomprehensible to leave aside the purple party", he has shelled.

In various spheres of the current confluence, they emphasize that these tensions come from afar and to date have remained buried, although on occasions they have emerged as in the discrepancies generated by the shipment of weapons in Ukraine. Although they do appreciate a qualitative leap in the level of reproaches raised against Díaz.

And other sources emphasize that this demand for respect from Iglesias is in line with the discomfort in a large part of the Podemos militancy due to the lack of clarity in the formation of Sumar, especially when in Podemos it is predicted that it will end up being a political party and that is why it demands a coalition with the platform.

Along these lines, these voices allege that there is uncertainty surrounding Sumar and that this displeases Podemos, especially in the formula for building a confluence candidacy and the weight of each organization. Doubts not only when it comes to making lists but also in relation to whether Sumar's programmatic base will be sufficiently ambitious or whether Díaz's platform can further delay its gestation.

To this they add that the confederal table of United We Can has barely met since the vice president assumed the leadership of the confederal space which, as those related to the purple party think, was the key body to coordinate a joint political strategy.

And the maxim that they outline is clear and that what happened in the configuration of the Por Andalucía coalition, where the purples denounce having suffered an alliance of IU and Más País in addition to being relegated from the electoral logo, cannot be repeated.

At the moment, the forecast is that Sumar will present its programmatic lines at the beginning of 2023, entrusted to its coordinators of sectoral teams and later, in principle around the month of February, Díaz will reveal if it is finally a candidate for the general elections.

On the other hand, other sectors of United We Can believe that a dynamic of confrontation has been shown abroad that is not positive, that Podemos has also exceeded its level of criticism and call to reduce the noise caused after the 'Autumn Uni' of we can

In this sense, they underline that the relationship between Podemos and Díaz must be redirected and that the division undermines the expectations of the left before the next electoral cycle.

However, they believe that the will to converge is greater than the nerves generated by the movements of the parties involved in the reconfiguration of the left beyond the PSOE.

Despite the internal conflict, a positive element highlighted by various sources is that at the territorial level the clash does not affect the relations of the parties with Sumar. And at this point they highlight that the regional leaders of Navarra (Begoña Alfaro) and La Rioja (Arantxa Carrero) were present in the last two acts of Sumar starring Díaz.

Before this open clash, the regional coordinators of Extremadura (Irene de Miguel) and the Basque Country (Pilar Garrido) also supported Díaz during the tour he is making throughout Spain.

In this way, they emphasize that the territories try to be affected by this climate and try to take advantage of the projection offered by all their leaders for the main objective, which are the municipal and regional elections.