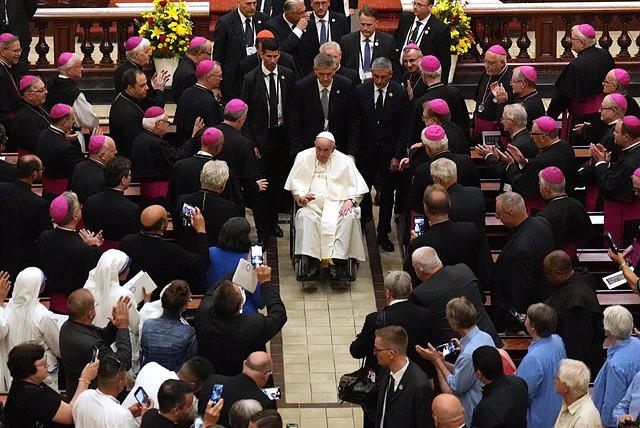 The Pope has assured this Thursday during his fourth day of travel in Canada that the country's Catholic Church has been "wounded by the evil perpetrated by some of his sons and daughters", and has apologized to the victims of sexual abuse committed in the country by the ecclesiastical institution.

During a mass celebrated at the Basilica of Notre-Dame de Québec, in the southeast of the country, the pontiff said that the Catholic Church in Canada is on a new path after being wounded by some of its members.

"I am thinking in particular of the sexual abuse of minors and vulnerable people, scandals that require firm action and an irreversible commitment," Francis said in statements collected by 'The Globe and Mail'.

"In these moments, we can do little more than cling to our sense of failure and ask: What happened? Why did it happen? How could it happen?" said the Pope, who has admitted that such questions are asked "with deep pain."

In this sense, Francis has forgiven all victims of sexual abuse committed within the Catholic Church of Canada.

"Together with you, I would like once again to apologize to all the victims. The pain and shame we feel must become an opportunity for conversion: Never again!", the pontiff maintained, stressing that the Christian community " can never again be infected by the idea that it is legitimate to use ways to coerce others", has collected 'Vatican News'.

Hours earlier, the Pope celebrated a mass at the National Shrine of Sainte-Anne-de-Beaupré, in which the Prime Minister of Canada, Justin Trudeau, also participated.

There, a group of indigenous people has exposed a banner that read: "Rescind the doctrine." In this way, they have asked the Pope to issue a new statement from the Catholic Church on the Doctrine of Discovery, according to organizers of the papal visit to the CBC network.

The pontiff has apologized to the indigenous people because the Church managed almost half of the 139 residential schools where they suffered all kinds of abuses. Even so, before the mass, a group of indigenous people unfurled a banner asking the pope in French "to rescind the Doctrine", in reference to the so-called 'Doctrine of Discovery', a series of papal bulls in the 19th century. XIV for which the colonization and appropriation of land was blessed.

Indigenous people have been expressing a mixture of hope and skepticism about the pope's visit, with some saying Thursday that they want to hear about the actions that will follow the pontiff's historic apology.

‹ ›
Keywords:
CanadaAbusos Sexuales
Your comment has been forwarded to the administrator for approval.×
Warning! Will constitute a criminal offense, illegal, threatening, offensive, insulting and swearing, derogatory, defamatory, vulgar, pornographic, indecent, personality rights, damaging or similar nature in the nature of all kinds of financial content, legal, criminal and administrative responsibility for the content of the sender member / members are belong.
Related News