Nancy Pelosi, to the Taiwanese president: "we will not abandon our commitment to Taiwan" 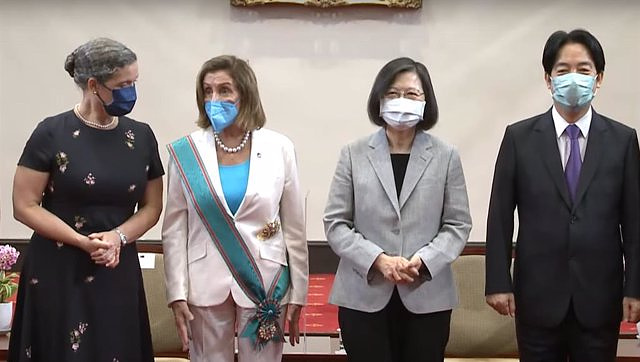 The president of the US House of Representatives, Nancy Pelosi, met this Wednesday at the Taiwanese presidential palace with the president of Taiwan, Tsai Ing Wen, amid an escalation of tension between the United States and China due to the visit of the politician to the island.

During a ceremony at the presidential office, Pelosi accepted an award from the president on behalf of the Taiwanese Congress, the 'Order of Auspicious Clouds with Great Special Cord', a "symbol" of the "cherished friendship" between the United States and Taiwan.

In her meeting with Tsai, Pelosi has assured that she and her delegation have traveled to Taiwan to "make it unequivocally clear: we will not abandon our commitment to Taiwan and we are proud of our lasting friendship."

"We come in friendship to Taiwan. We come in peace for the region (...) understanding the value of peace and conflict prevention," said Pelosi, thanking the commemoration for being "a friend of Taiwan": "You have saying that I am a friend of Taiwan, and I think that is a great compliment for me.

In this sense, Pelosi has detailed that her visit to the island, like any other destination, is due to three purposes. "One is security: security for our people, global security. Two is the economy: spreading as much prosperity as possible. And three is governance," he detailed, according to a statement from the office of the president of congress.

Likewise, Pelosi has congratulated Taiwan for being "one of the freest societies in the world, for its success in addressing the problem of COVID-19, which is a health problem, a security problem, an economic problem and a governance".

"We look forward to our conversation on how we can work together, learn from you and share some thoughts on how to protect the planet from the climate crisis... We thank you for your leadership. We want the world to recognize you," he added.

On the other hand, Pelosi has underlined the importance of the bill on chips approved by the US Congress, since it presents "a good opportunity for the United States and Taiwan to cooperate in the economic field."

He has also urged both parties to collaborate on security, foreign affairs and governance, according to the statement from the office of the president of the US House of Representatives.

For her part, President Tsai has assured that Pelosi is "Taiwan's most faithful friend", while underlining the importance of visiting US congressmen on the island, as reported by the newspaper 'United News Network'.

"Thank you for your visit to Taiwan this time, which shows the strong support of the United States Congress for our country," Tsai told Pelosi, recalling that the latter had already visited Taiwan in October 1999.

"For more than 20 years, Pelosi has been paying attention to Taiwan's democratic development and has been concerned about Taiwan's international involvement, for which she would like to express her sincere thanks," added the Taiwanese president.