Montero, supported by Podemos, defends the "yes is yes" law and calls for feminist unity in the face of "political violence"

He receives the explicit support of Zapatero and Carla Antonelli with Pablo Iglesias and charges of IU and the purple party among the public. 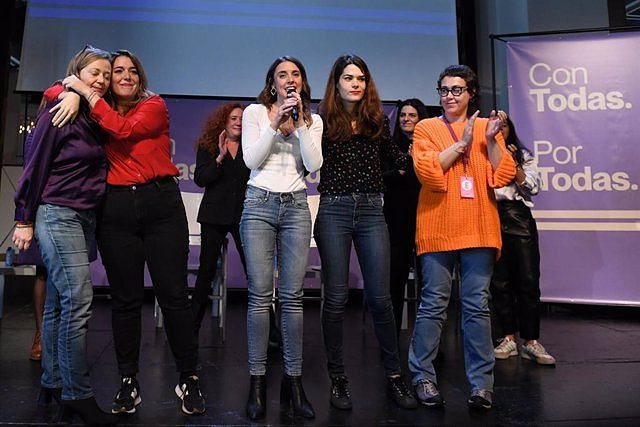 The Minister for Equality, Irene Montero, has defended the 'only yes is yes' law because it protects all women who suffer sexual violence and has demanded feminist unity in the face of "political violence" that "will not stop", because "It is not a fight" but the "strategy" of the "political, judicial and media" right to stop the advances of the coalition government.

This has been transferred during the act 'With all. For all', organized by Podemos in the Círculo de Bellas Artes precisely to cover the head of Equality, after the personal attack that Vox launched in Congress and the "hunt" against her for the controversy over the reduction of sentences for those convicted after the entry into force of the law.

A support to which the former socialist president José Luis Rodríguez Zapatero and the former deputy of the PSOE in Madrid Carla Antonelli, charges of IU and former vice president Pablo Iglesias, present among the public, have also joined.

And one day after the 25N and the demonstration called by the Feminist Movement of Madrid with the presence of PSOE ministers where shouts were heard calling for her resignation, the minister has appealed to the need for all feminists, despite the diversity and even discrepancy that the movement presents, are "together and united" to "defend the advancement of rights."

"Political violence is a strategy for us to doubt ourselves, one another (...) so as not to generate networks of trust, of alliances. That is why it is important that compañeras use their power to raise their voices and defend the achievements of feminism", she appealed during her speech.

Above all, he has cited the need to end the legislature with the approval of projects such as the Trans Law and the abortion reform, while stressing that the "only yes is yes" regulation is "solid" and must be correctly applied by judges, because it protects all victims of sexual violence (something that happens in nine out of ten cases).

What's more, Montero has stressed that this campaign of "political violence" seeks to "destroy" her and other leaders, such as the former PSOE ministers Bibiana Aido and Leire Pajín, because it is not limited to "insults" but rather a plan by their adversaries to curb feminism as a whole, discipline its leaders, and into which "media progressives" have also fallen.

The proof of this, Montero has recounted, is the "reaction of the extreme right" and of the PP, which said about the Vox incident: "who sows wind reaps storms." And it is that he has stressed that "she is not the first nor will she be the last" that this campaign suffers, to commemorate the reprisals during the Franco regime against left-wing women. "The adversaries are not going to stop", he has reaffirmed himself.

ZAPATERO AND ANTONELLI: "ALL THE HATE HAS FALLEN ON YOUR BACK"

Applauded at various times with applause and slogans such as 'Irene', 'Sí se puede' and 'If they touch one of us, they touch us all', one of the surprises was the broadcast of a video with the support of Zapatero, who He has made clear his appreciation to the minister for the laws promoted, against those who "insult", boast of their "machismo" and represent a "dark and gloomy past".

"We can boast of promoting the culture of rights, equality and the culture that advances society," stressed the former leader of the PSOE.

Antonelli herself, who left the ranks amidst criticism of the party's attitude towards the Trans Law and has also been applauded by the attendees, has addressed a few words to the audience to show her solidarity for the "attacks" and "violence" against "everything that comes out of the Ministry of Equality", even from those sectors of the left that do not assume that there is a coalition government. "I will always be grateful to you for your support for the 'Trans' Law (...) All the hatred has fallen on your back," she exclaimed.

CLOSING OF RANKS OF WE CAN

In this appointment to cover the head of Equality, he has received the support of his party with a multitude of cadres from Podemos but also from formations such as En Comú Podem (through his deputy Ismael Cortés) and the leader of the IU and general secretary of the PCE, Enrique Santiago, in addition to the former deputy of the formation Willy Meyer. The lawyer and ex-charge of IU Cristina Almeida has also attended.

The purple formation has mobilized to close ranks with the head of Equality with the presence of its leader and Minister of Social Rights, Ione Belarra, various regional coordinators such as Jesús Santos and Alejandra Jacinto (Madrid), Pilar Garrido (Basque Country), Irene de Miguel (Extremadura) and Antonia Jover (Balearic Islands), among others, and state officials such as the Secretary for Organization, Lilith Verstrynge, the state co-spokesperson Isa Serra, various deputies in Congress, the Secretary for Equality, Ángela Rodríguez 'Pam' and the government delegate against gender violence, Victoria Rosell.

The influx to the event, convened in just 48 hours, has exceeded the forecasts of the organization. According to party sources, 400 people have filled the capacity of the room where the act was unfolding, another 200 have been followed by monitors in an adjoining hall and 700 have remained outside, waiting to gain access to the venue, which has motivated that both Belarra and Verstrynge came out to thank them for their commitment to the Minister for Equality.

The journalist Cristina Fallarás, the president of the Trans Platform Federation, Mar Cambrollé, the lawyer Carla Vall, the actresses Itziar Castro and Patricia Galván and the communicator Jen Hernanz, have also participated together with the two ministers of the purple party, with messages that have alternated the support and criticism of part of the left that does not claim the figure of Montero.

Among the public, there were also representatives of social groups such as 'Somos Tribu Mujeres', SAT 'Impacto de Género Ya' and the president of the association in defense of domestic and care workers (SEDOAC), Carolina Elias.

BELARRA: THE OBJECTIVE OF THE HUNT IS TO "DESTROY" MONTERO

Meanwhile, Belarra has also taken the floor to open the event and has claimed the need to "clothe" a "friend" like Montero, who has received a "wave of affection and solidarity" from Latin American presidents such as Gabriel Boric (Chile), Alberto Fernández (Argentina) and Gustavo Petro (Colombia), who recognize that it is "vanguard" and "bulwark" in terms of feminist rights.

Of course, the general secretary of Podemos has denounced that Montero suffers the "wildest" "political hunt" since they entered the coalition government and the party was even founded, sponsored by the "judicial, political and media right", but also on the part of "progression".

"The objective has always been personal destruction to destroy the political objective, to destroy her to destroy the dream of millions of women with a society free of sexist violence," Belarra cried.

In fact, he has proclaimed that Vox's personal attack on Congress was the "straw that broke the camel's back", which began to be filled with a "smear campaign" against the minister because she is a "woman, young and feminist", who does not he gives in to "machismo", to "patriarchal justice" and to those who "command but do not stand in the elections".