Marlaska acknowledges a "slight" rise of 3.9% in sexual crimes and the PP sees him as an "accomplice" in releasing rapists 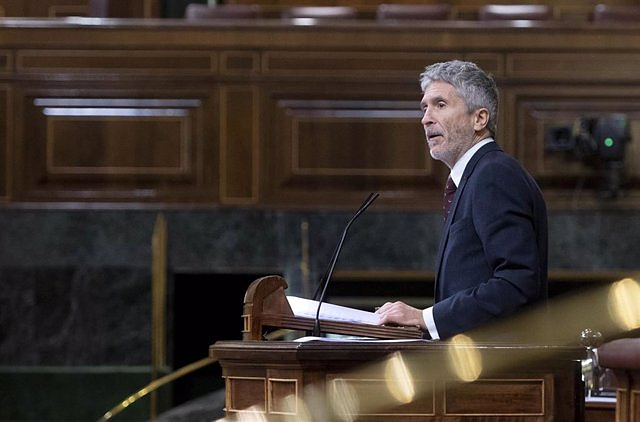 The Minister of the Interior, Fernando Grande-Marlaska, has defended this Wednesday the media to deal with the "slight increase" of 3.9% of sexual crimes in an intervention in Congress in which he has defended the law of 'only yes It is yes' because it "protects women", a law that the PP has criticized for the "colossal nonsense" that involves the at least 42 reductions in sentences and the ten releases of rapists for now, which is already "irreversible".

In the control session in Congress, the PP has raised the rise in these crimes to 30% since Grande-Marlaska is Minister of the Interior, with 33% more violations, and recalling that half of the cases are committed by minors . For this reason, the deputy Macarena Montesinos has asked him to resign, assuring that he is an "accomplice" in the "colossal nonsense" of Minister Irene Montero's law.

Grande-Marlaska - who this Wednesday returns to appear before the Plenary for the tragedy in Melilla on June 24 - has begun his speech ironically about the "success" of the PP in these four and a half years in which he has been asking for his resignation . In addition, he has asked the main opposition party "not to create social alarm", adding that his impression is that "they are enjoying" the controversy surrounding the 'only yes is yes' law.

"The 'yes is yes' law protects women," said Grande-Marlaska, who has advocated waiting for the Supreme Court ruling on cases such as that of the Arandina footballers. The minister has drawn applause from the United Podemos bench, including the Minister of Equality, Irene Montero. In addition, he has alluded to the rise in sexual crimes between 2015 and 2018, when the PP governed and they went from 9,869 crimes "to an average of 13,782."

Grande-Marlaska has also mentioned that, unlike the PP, there are now more Police and Civil Guard agents carrying out "real and effective control" to prevent sexual crimes and working with Penitentiary Institutions, citing the project within the prisons of the ' Circle of support and responsibility'.

‹ ›
Keywords:
PPMarlaska
Your comment has been forwarded to the administrator for approval.×
Warning! Will constitute a criminal offense, illegal, threatening, offensive, insulting and swearing, derogatory, defamatory, vulgar, pornographic, indecent, personality rights, damaging or similar nature in the nature of all kinds of financial content, legal, criminal and administrative responsibility for the content of the sender member / members are belong.
Related News