Marc Márquez: "It is clear that there is a possibility of racing in MotorLand, but I have to know how to listen" 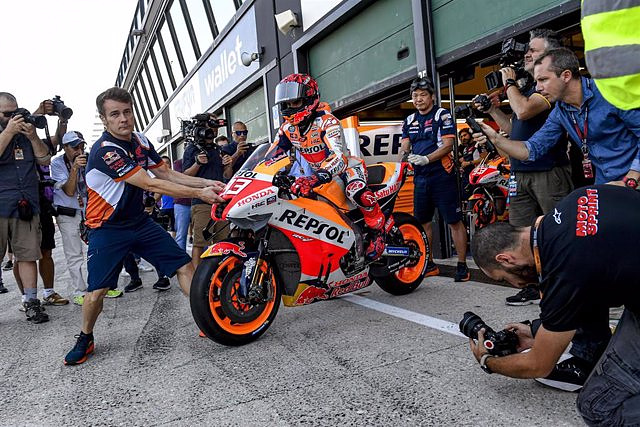 The Spanish MotoGP rider Marc Márquez (Repsol Honda) does not hide that he has "a chance" to race next week at the Aragón Grand Prix, but he admitted that now he has to "know how to listen" and that he will return only "with guarantees" to finish the race.

"What if there is a possibility of running the Aragon Grand Prix? It is clear. What if I feel more or less well, am I going to try it? You already know me, but I also have to know how to listen and know what position I have to take now ", Márquez commented in statements to 'DAZN' during the test carried out in Misano.

The eight-time world champion made it clear that if he had attended these tests it is because his "intention is to return as soon as possible", although, after finishing "satisfied" at the Marco Simoncelli, he warned that he will do so when he has "guarantees of finishing a race".

"When I got off the bike the first time, there was a smile because you feel the adrenaline again. I was happy and excited and I'm happy with how it went," added the Catalan, who does not hide that they are still "far from the other brands " and that "there is work to be done".

In this sense, "at the level of rhythm", the one from Cervera knew that it was going to cost me "a lot". "He even left the 'box' and each session was a warm-up until he didn't start to roll fast", he pointed out. "I have been able to verify that, to complete an entire career, I still have work to do," he added.

"This Misano test has been a great litmus test. The recovery is being faster than expected, but I am working day and night to try to return to racing as soon as possible, it is the objective, but always respecting the times and above all, the body," said Márquez.