The penitentiary administration will establish its regimen and may mitigate it, attending, among others, to health reasons. 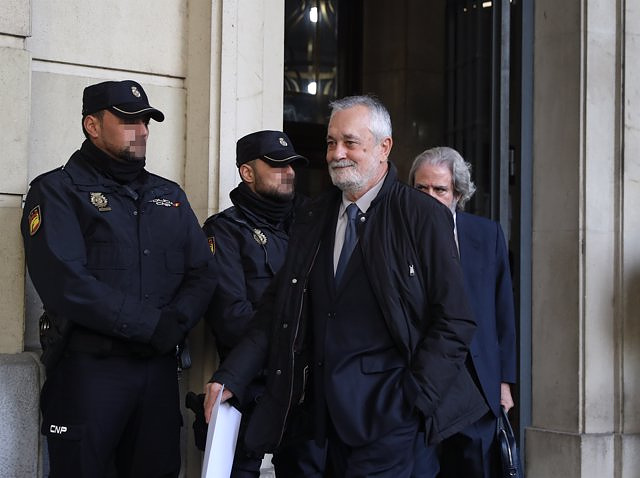 The penitentiary administration will establish its regimen and may mitigate it, attending, among others, to health reasons.

The Supreme Court (TS) has announced this Wednesday the sentence confirming the sentence of 6 years in prison that the Court of Seville imposed on the former president of the Junta de Andalucía José Antonio Griñán in the 'ERE case' for crimes of prevarication and embezzlement, placing him one step away from prison. Now, it will be the Sevillian court that decides when he should enter jail and Penitentiary Institutions if he is deserving of any benefit.

The Criminal Chamber of the TS has ratified the sentence issued by the Seville Court on November 19, 2019, considering it proven that Griñán had "knowledge of the illegality" of the criteria that was followed with the ERE, as well as his "passivity" before the "waste and arbitrariness" with which the aid was granted: more than 700 million in a decade.

The Supreme Court advanced its ruling on July 26 but it was not published until September 14. Once the notification of the 1,115 pages of the sentence (plus the 88 of the individual vote signed by two of the five magistrates) has been completed, it is up to the Seville Court to notify those sentenced to prison terms, including Griñán, about their entry into prison .

From the notification of the Court of Seville, Griñán will be at the expense of the period of time specified in the court order with the deadline for admission to prison. Legal sources explain to Europa Press that the usual thing is that they grant him ten days to do so. The former Andalusian president, like the rest of the convicts, can choose a penitentiary center of his preference, taking into account the proximity to his home due to family roots, among other factors.

Once they have been admitted to prison, the entry protocol establishes that Penitentiary Institutions evaluate whether the convict will serve his sentence in this center or be transferred to another, according to organizational and security criteria.

The body dependent on the Ministry of the Interior will also have to decide, following a pronouncement by the team of technicians that is part of the treatment board, whether the inmate is classified in second degree or ordinary regime --the most common--, and may also opt for the semi-freedom of the third degree, conditional freedom or establish benefits --through the principle of flexibility of article 100.2-- attending to issues such as their state of health.

The penitentiary regulation establishes a maximum period of two months from the reception in prison of the testimony of the sentence. In the event that he is classified in the second degree, the inmate has to wait until he has served a quarter of his sentence to be able to request exit permits, which would require prior authorization. In any case, these decisions of the penitentiary administration can be appealed by the Prosecutor's Office.

Within the procedures of any first admission, the prisoner is given a record and is recognized by the medical service, in addition to being interviewed by a multidisciplinary team made up of social workers and psychologists who evaluate him.

The aforementioned legal sources indicate that Griñán could still go to the Supreme Court for two specific procedures that would not suspend his imprisonment: the clarification of the sentence, to shed light on "some obscure concept" and "to rectify any material error" or "omissions "; and the incident of nullity.

Sources close to Griñán's defense have already advanced to Europa Press that they plan to present this nullity incident. The law only allows it to be formulated for violation of fundamental rights and gives a period of 20 days to do so, counting from the notification of the sentence. This step, indicate the aforementioned legal sources, is necessary to be able to go later to the Constitutional Court (TC).

Once the incident of annulment was aired by the same Second Chamber in a dismissal sense, the former Andalusian president could formalize an appeal for protection before the TC, something that the defense already anticipated that it would do after knowing the ruling of the TS.

This remedy of amparo would not mean an automatic suspension of his entry into prison either. For this, he would have to expressly request it in his writing as a precautionary measure. And the sources of the court of guarantees consulted by Europa Press point out that the TC does not usually stop the entry into prison when the sentence exceeds five years of deprivation of liberty, as is the case.

In a recent order dated June 16, the TC states that this is so because sentences of more than five years are considered "serious", although it adds that constitutional jurisprudence also takes into account other criteria such as "the seriousness and nature of the prosecuted facts and the protected legal asset, its social significance".

All in all, the last card that Griñán could play to avoid jail is the request for pardon that his family has already presented to the Ministry of Justice, alleging reasons of humanity", and that will now have to be processed, giving rise to a process which on average exceeds six months

‹ ›
Keywords:
Junta De AndalucíaERECrímenesTribunal SupremoCorrupción
Your comment has been forwarded to the administrator for approval.×
Warning! Will constitute a criminal offense, illegal, threatening, offensive, insulting and swearing, derogatory, defamatory, vulgar, pornographic, indecent, personality rights, damaging or similar nature in the nature of all kinds of financial content, legal, criminal and administrative responsibility for the content of the sender member / members are belong.
Related News