Considers that the situation is "unacceptable" and that the reasons of heritage are not above the rights of people. 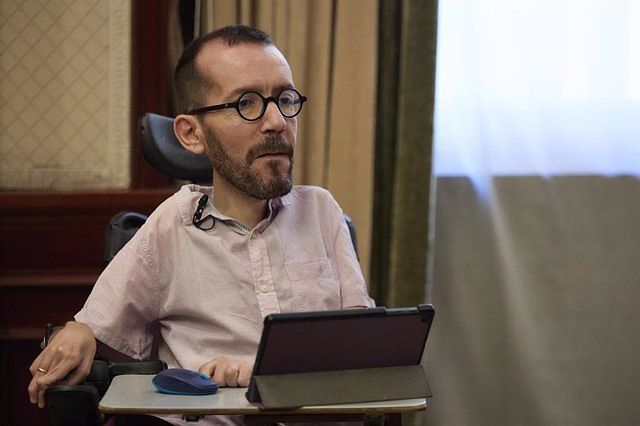 The spokesman for United We Can, Pablo Echenique, has called on the President of Congress, Meritxell Batet, to take up the reform project of the hemicycle to adapt it to people with reduced mobility and, in this way, to be able to intervene in the plenary sessions occupying his seat in the second row of the plenary hall. And it is that she has ruled that the current situation is "unacceptable".

Despite the fact that the facilities of the Lower House have been modified in recent years due to the presence of several deputies with physical disabilities who moved around in wheelchairs, the chamber has not yet been fully adapted to the needs of these people, partly for its heritage and artistic value.

In 2020, the option of tendering works to advance on this plot was already considered and the Board even contemplated the option that the deputy could access his seat through a mechanical, approved and hidden system, which allows a platform to be raised to a level height of three steps. However, the pandemic delayed addressing the issue.

Since then no progress has been made in said reform and in this sense Echenique, who suffers from spinal muscular atrophy, has sent Batet a letter asking him to clarify whether there is "any possibility" in the remainder of the term of "adapting a seat in line of the Parliamentary spokesmen" (the second row, which is located just behind the blue benches of the Government), so that he can get his seat for the first time, and "is not discriminated against".

To facilitate the presence of these deputies in plenary sessions, the solution for years was to place them in the highest part of the room, known as the 'chicken coop', where the only seats that can be accessed by elevator are. And when they had to intervene, they were provided with a side table and a microphone in the center of the hemicycle, near the stenographers' table, since the gallery is only accessible by stairs.

But Echenique's appointment as parliamentary spokesman caused a change of plans. This position implies that his seat should be in the first row of his parliamentary group and implies a greater number of interventions in the debates. However, since this legislature began, the purple leader has followed the sessions in the center of the Plenary Hall, in front of the chairs occupied by the Government and without the company of anyone from his formation.

The purple leader transfers that "two and a half years have already passed" of legislature and that the current situation is "simply unacceptable". In this way, he recalls that at the beginning he had to "deal" with the exceptional circumstances derived from the pandemic, something that he understood and that meant delaying that reform, but he also deepens that "this condition has practically disappeared for a long time".

In this sense, he pointed out that he has spent the entire legislature "without a physical seat and also separated from his group", nor does he use the rostrum because he is in a wheelchair.

"As you can imagine, I have had to work all my life facing numerous difficulties and, therefore, I am perfectly capable, personally, of carrying out my parliamentary work in these conditions. What happens is that this is going far beyond my person (...) The issue is whether the seat of popular sovereignty, in the fourth economy of the Euro zone, in the XXI century, is going to facilitate the material conditions so that discrimination is not exercised against deputies elected representatives with disabilities who may or may not become spokespersons for their group," he states in that letter.

He also takes charge that there are some reports against the possibility of carrying out said reform of the chamber for reasons of possible damage to the historical heritage, but then adds that this "argument is not acceptable".

"The historical heritage is not above the rights of the people and, furthermore, I understand that the reports are not binding," Echenique explains to emphasize that Congress "has the necessary sovereignty to make the most sensible political decision" also concurring the reasons it alleges.

Therefore, he argues that if for some "absurd" reason it were "directly illegal" to carry out the adaptation, he asks Batet to indicate what laws prohibit it in order to immediately study its modification.

In addition, Echenique tells Batet that one possibility is that the rest of the spokespersons will carry out their work from a seat in the 'chicken coop' or that the rest of the deputies will use the small portable speakers' platform in the middle of the chamber to equate them with the deputies in a wheelchair, although he then clarifies that it does not seem to him the "most sensible" solution and that he certainly would not choose this option.

"But, if everything else were impossible or contrary to law (or both), this would at least allow us to face any citizen who asks us how it is possible that we are still like this in the year 2022 in the Congress of Deputies", concludes his letter Echenique.

‹ ›
Keywords:
PodemosPablo EcheniqueMeritxell Batet
Your comment has been forwarded to the administrator for approval.×
Warning! Will constitute a criminal offense, illegal, threatening, offensive, insulting and swearing, derogatory, defamatory, vulgar, pornographic, indecent, personality rights, damaging or similar nature in the nature of all kinds of financial content, legal, criminal and administrative responsibility for the content of the sender member / members are belong.
Related News