Borrell warns that there may be an entrenchment of the war: "That can happen here"

He makes himself available to Aragonés and rules out ruling on Puigdemont's immunity: "European judges will have to decide". 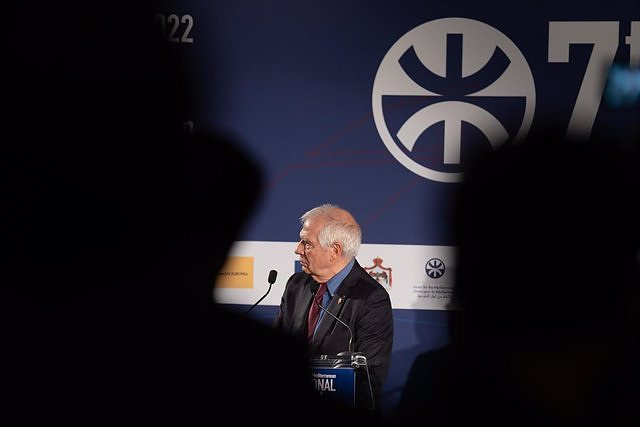 He makes himself available to Aragonés and rules out ruling on Puigdemont's immunity: "European judges will have to decide"

The High Representative of the European Union for Foreign Policy and former Minister of Foreign Affairs, Josep Borrell, spoke this Friday on the repeal of the crime of sedition, arguing that "the name is changed, but the essence does not disappear". and it has stressed that what is being done is to better organize the separation of crimes against the constitutional order and against public order.

"The actions that have a political reason for being are made clear and those that have a disturbance of public order", which may have more motivations beyond politics, he assured in an interview on La 2 and Radio 4.

He has also affirmed that in Catalonia "it is beginning to be understood" that to change things it must be done by changing the laws, referring to the current government of Pere Aragonés, but he regretted that for this to happen the independence process had to take place.

He has also spoken out about the war in Ukraine, warning that in this armed conflict there could be an entrenchment as, in his opinion, it has happened in the case of North Korea and South Korea: "That can happen here."

He has assured that this conflict could end up having "a front line, with controlled violence and an agreement so that there are no incidents."

Likewise, he has maintained that negotiation is always on the table, but he has explained that everyone who has gone to speak with the Russian president, Vladimir Putin, has returned with the same message: "I have military objectives that I have to achieve and as long as I don't I get them I will not return from the war", Borrell has related.

The head of European diplomacy has stated that right now he has no relationship with the Kremlin "because Russia does not want to", since he prefers to speak with the countries separately than with him, explained Borrell, who sees this strategy as an attempt to divide to the members of the EU.

Regarding the role of the EU, he has maintained that Europe can send more anti-aircraft defenses to Ukraine, send more military aid and to replace the damage caused by the war, although he has recognized that rebuilding the Ukrainian electrical system is more difficult, and he added that Russia wants to "put Ukraine cold and in the dark."

He has accused Putin of using "hunger as a weapon of war" in Africa, by not sending wheat to these regions and causing more migratory pressure with strategic calculations towards Europe -he said verbatim-, after which he has opted to regulate migration .

Borrell considers that there are two ways to deal with migration from Africa, the first is to help the development of these countries from Europe, with more opening of markets and more investment, and "as long as that does not happen, regulate migratory flows", since he ensures that Europe also needs migration because it is in a demographic winter.

‹ ›
Keywords:
UEJosep Borrell
Your comment has been forwarded to the administrator for approval.×
Warning! Will constitute a criminal offense, illegal, threatening, offensive, insulting and swearing, derogatory, defamatory, vulgar, pornographic, indecent, personality rights, damaging or similar nature in the nature of all kinds of financial content, legal, criminal and administrative responsibility for the content of the sender member / members are belong.
Related News