Borja Mayoral: "I think I would have had minutes at Real Madrid"

The striker opted for Getafe because he wanted "more prominence" and "tranquility". 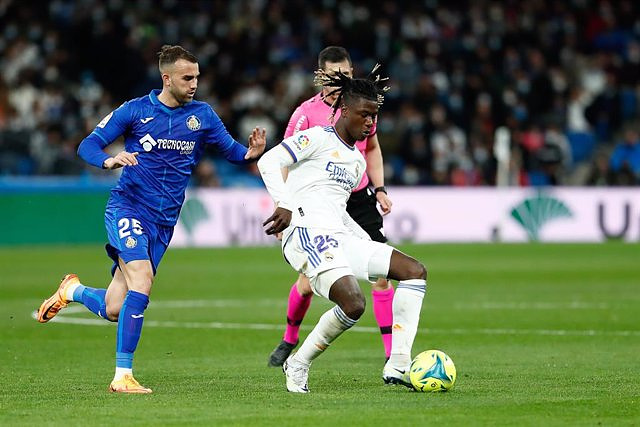 Getafe's new striker Borja Mayoral pointed out this Thursday that "yes, he would have had minutes" at Real Madrid, but finally decided to change his mind and join the club in the south of the region to have "more prominence", "confidence" and calm".

"Seasons are very long and I think I would have had minutes, but I felt I had to come to Getafe. I'm going to have more prominence and that's what I'm looking for," said the 25-year-old striker on his departure from the team merengue at the press conference for his presentation as 'azulón'.

Mayoral acknowledged that he did see himself as a Real Madrid striker for next season, because "he had a contract and was training with them", although he confessed that he had "little conversation with Ancelotti". "My wish is to be stable in Getafe, then we'll see, I want to go little by little. I've been under the pressure of having to do well to return to Madrid and I want to be calm," he added about a possible return to the white club.

"It hasn't been easy, the club has made a great effort for me to be here, hopefully it will be a great year collectively and personally. There is not just one reason (to sign for Getafe). I was here for six months, I feel at home," he explained.

For Mayoral, who already played as a 'azulón' the second part of the season last year -6 goals in 18 games-, it was a priority to return to Getafe. "When I finished the season I already had talks to come back here. All roads led to Getafe, it's been a long time, but I'm happy to be here," he insisted.

"Many positive things come together that I've been looking for a long time, Getafe gives me stability. I have a five-year contract and that will help me gain confidence, have security when playing. That stability is going to help me a lot and it's going to make a better player. I was looking for stability and peace of mind having signed for several years. I wanted to play with more confidence and not with the pressure of what is going to happen next year. The goals will come by themselves," he predicted about his new stage.

The soccer player expressed that he can contribute "work on the field, technical quality, goals, team play", in addition to his experience in other leagues. "I can prove a lot of things and I am willing to do so," he added.

"In Levante I already played with two strikers and I do like it. Playing with Enes Ünal helped me a lot, we complement each other very well. Hopefully we can score many goals", he concluded regarding the system that best suits him as a striker.