Koke: "We don't think about crossings or avoiding Brazil" 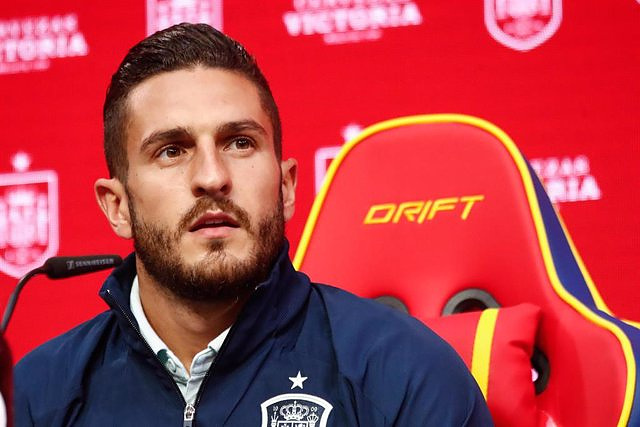 The Spanish international Koke Resurrection has assured that they do not think about possible "crosses" in the World Cup in Qatar, to try to avoid rivals such as Brazil, in addition to downplaying the debate on the preparation of Luis Enrique's list, recalling that " matches can be won by individuals, but long championships are won by teams".

Regarding the preparation for the appointment, the Atlético de Madrid midfielder acknowledged that he is being "different" from "all the World Cups that have been played in the summer". "We come with the rhythm of competition and fresh. I have been unemployed for three weeks, but I have done a very good preparation to arrive in good shape. Those who have been competing have the rhythm of competition. Being competing makes you arrive a little fresher, "he said. .

In this sense, he spoke of the injury suffered a few weeks ago and his feelings when it occurred. "A lot of things went through my mind, first of all, that I be as little as possible to help my team. The issue of the national team also crossed my mind, I was counting down the days to see when the World Cup list was. In the end, it was a small injury. I did a very good preparation, I was training every day with double and triple sessions to be able to arrive and be on this list and to be at my best to be available if the coach wanted to call me. Luckily, we are here ", he stressed.

Koke, who faces his third World Cup after Brazil 2014 and Russia 2018, assured that all the groups of the different championships are "different". "There are different people and they all have their own personality. We have a spectacular group, made up of very young people who come with a lot of enthusiasm and enthusiasm. The other groups that were in Brazil and Russia were also incredible," he said.

"The older ones, when these types of tournaments and difficult moments arrive, we try to help our teammates to move forward. It is one of the ways in which we can help. There are going to be very difficult moments, because in these types of tournaments the there is always, and we want to support our teammates. We will surely need that help and the more united we are, the easier it will be to get out of difficult situations", he added.

"People can give their opinion what they want, they are within their rights. The strength of this team has always been the group, the collective; there are players of a very high level, but our strength has always been the group. seen that the team plays as a team, and that is fundamental. There are matches that can be won by individuals, but the long championships are won by the teams, the groups," he continued.

In another order of things, he did not want to assess the possibility that Luis Enrique could lead Atlético after the World Cup. "'Cholo' has a contract until 2024, Luis Enrique is the Spain coach. That is a question for him, if he would come to Atleti or not. They are different coaches who have spectacular energy and a clear message. They always go to the death with his team and with his idea. Each coach has different concepts; with Luis Enrique we have more possession of the ball, we want to make long possessions, and with Atlético de Madrid we are more direct. I don't know if tomorrow he will be coach of Atlético de Madrid, I can't tell you, but 'Cholo' has a contract until 2024," he said.

"A team is not the same as a national team. In a team you live together on a day-to-day basis and many things happen; in the national team they also happen, but it's different. When it comes to death, it's practically the same. At Atleti I am day by day and here, less, "he continued.

Finally, Koke also valued Luis Enrique's decision to act as a 'streamer' during the World Cup. "It's a way to communicate with people and be a little closer. In the day we live in today, technologies are very advanced and he has decided that way. Totally respectable and I see it well," he concluded.