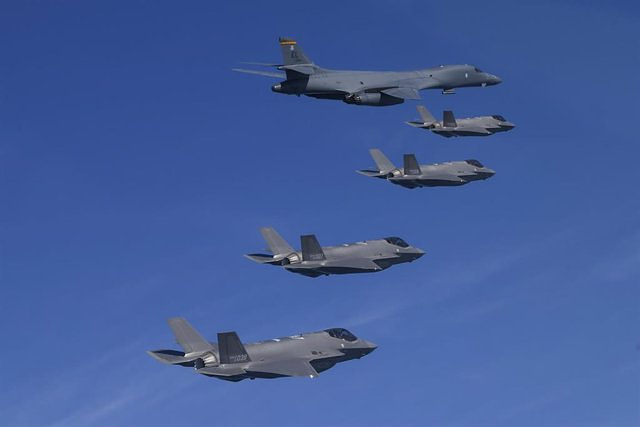 The South Korean Joint Chiefs of Staff has reported that the strategic bomber has flown over the South Korean Air Defense and Identification Zone (KADIZ) escorted by South Korean F-35A and US F-16 fighter jets.

"These maneuvers once again demonstrate the joint military capacity of the South Korea-United States alliance and Washington's commitment to the protection of the Korean Peninsula and to enhanced deterrence," the South Korean Armed Forces said in a statement collected by Yonhap news agency.

In addition, the Joint Chiefs of Staff has stressed that Washington will continue to cooperate closely with Seoul to monitor North Korea's military actions and improve the joint response to North Korean "provocations".

The United States has sent two B-1B strategic bombers to Korea for the first time since 1917 as part of the 'Vigilant Storm' exercises.

North Korea launched a nuclear-capable Hwasong-17 intercontinental missile on Friday. The projectile can carry several nuclear warheads to a radius of about 15,000 kilometers, that is, enough to reach the entire continental United States.

‹ ›
Keywords:
Estados UnidosCorea Del Norte
Your comment has been forwarded to the administrator for approval.×
Warning! Will constitute a criminal offense, illegal, threatening, offensive, insulting and swearing, derogatory, defamatory, vulgar, pornographic, indecent, personality rights, damaging or similar nature in the nature of all kinds of financial content, legal, criminal and administrative responsibility for the content of the sender member / members are belong.
Related News