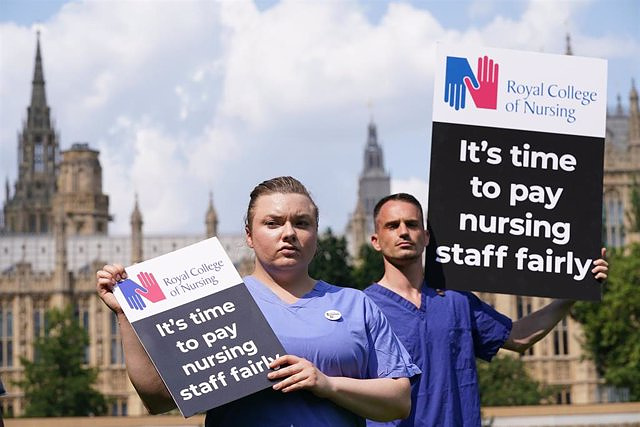 The UK's main nursing union has announced strikes for December 15 and 20, in what would be the first stoppage in the history of the British healthcare system.

The British Royal College of Nursing (RCN) has indicated that it has had no choice following the failure of talks with government ministers, in which they called for a pay increase of five per cent above the rate of inflation, therefore that workers in England, Wales and Northern Ireland will stop two days in December for 12 hours.

RCN general secretary Pat Cullen has indicated that it is "ministers who have chosen to strike": "They have the power and means to stop this by opening serious talks to address our dispute."

"Nurses are fed up with being taken for granted, underpaid and insecure staffing, with us not being able to give our patients the care they deserve," Cullen said. as the BBC has collected.

The announcement of this health strike adds to the walkouts of postal workers, university staff and Scottish school teachers, as well as workers in the railway sector.

Although unions have signaled that there are no plans for general strikes, several have spoken of coordinating actions to maximize disruption and political impact.

The economic impact of the strikes remains uncertain, according to the Office for National Statistics (ONS), whose growth figures previously estimated the impact of closures such as Queen Elizabeth II's funeral in September, The Guardian reports.

‹ ›
Keywords:
Reino UnidoSindicatos
Your comment has been forwarded to the administrator for approval.×
Warning! Will constitute a criminal offense, illegal, threatening, offensive, insulting and swearing, derogatory, defamatory, vulgar, pornographic, indecent, personality rights, damaging or similar nature in the nature of all kinds of financial content, legal, criminal and administrative responsibility for the content of the sender member / members are belong.
Related News