Ron DeSantis emerges as an option with ample possibilities for moderates and party renewalists. 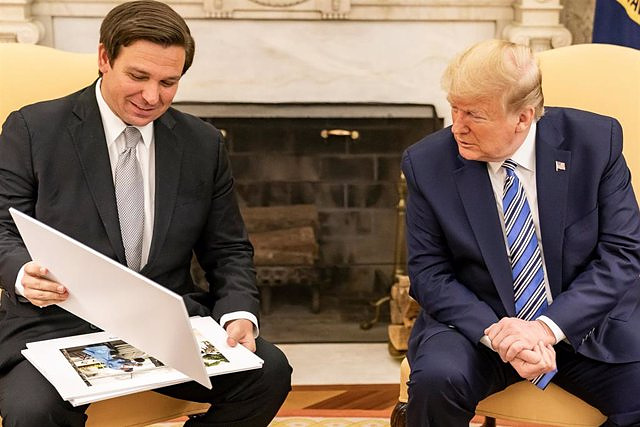 The categorical denial of one of the most prestigious conservative magazines in the US, 'National Review', to Donald Trump's new candidacy for the White House -- a huge headline with a resounding "NO" in its editorial on Tuesday -- is not entirely representative of Republican sentiment regarding the possible return of the tycoon, one greeted more affectionately by his voter base and the congressmen he promoted during his tenure than by the 'barons' of the party.

According to a Pew Research Center poll dated November 14, about 60 percent of Republicans hold a favorable view of Trump, whose popularity remains intact among the 50-and-over population, having declined sharply only two times. sections: the percentage of Republicans who remember him with "extreme affection" and among the population of university graduates. Trump returns, generally speaking and according to the institute, with support almost intact, but in a "cooler environment" and less receptive to any wrongdoing he might commit.

These figures are given two years before the presidential elections and still a year away from the Republican primaries that will take place between February and July 2024, during which time the situation could change drastically. In fact, the 'National Review' itself was opposed to Trump's participation in 2016 before assessing the first two years of his Presidency relatively positively.

Another more conservative outlet than the 'National Review', such as 'The Federalist', has not yet spoken openly about Trump's decision and prefers to keep the options open when choosing between the former president and what could be his great rival for the 2023 primaries, the governor of Florida, Ron DeSantis, brand new winner of the local elections on November 8 by 20 points of difference against his Democratic rival.

"If (Republicans) want to once again enjoy victory and the exercise of political power to protect their interests and promote their ideal as a nation, they must look elsewhere," writes columnist Nathanael Blake in 'The Federalist'. "Specifically, they should look at Florida, where DeSantis is apparently preparing himself and can contrast his landslide margin of victory with the blunders of many of Trump's favorite candidates," he adds.

"Trump's allies performed worse than the rest of the GOP candidates and that means one thing: the emperor can finally be said to be naked," he added.

Within the Republican Party, the only ones who have shown themselves in favor of Trump's return have been those closest to his ultranationalist movement, seriously injured right now in the middle of an investigation against the former president for allegedly encouraging the insurrection of January 6, 2021 at the Capitol.

Standing out above all is Congresswoman Marjorie Taylor Greene, Republican from Georgia, or her fellow bench members from Texas, Troy Nehls and Arizona, Andy Biggs, who directly declared Trump as "the leader of the Republican Party." Voices of some weight in the party and not necessarily associated with this movement, such as South Carolina Senator Lindsey Graham, have applauded his decision to run. "If it continues like this, it will be difficult for them to stop it," she has indicated.

Outside of this group, however, numerous heavyweight Republicans have declared Trump's candidacy a threat to the party. "Repeating a defeat is not only stupid. It is a gift to the Democratic Party. We have to turn the page," said the outgoing governor of Maryland, Larry Hogan, who lost in the summer primaries against the 'trumpist' Dan Cox. Cox ended up overwhelmed in the November 8 elections against Democrat Wes Moore, who took him 30 points ahead.

Even former staffers in Trump's own administration also cast doubt on his choice to run, including former White House director of strategic communications Alyssa Farah. "He is a totally unsuitable choice for office and a clear and distinct danger to democracy," she wrote on her Twitter account.

Despite this skepticism, the polls are far from giving Trump a hopeless case. The former president has comfortably led all the polls on the favorite Republican candidate for the White House right up until the midterm elections.

In fact, one of the most recent polls, conducted by YouGov two days after the election, only gave DeSantis a seven-point lead over Trump (42 percent to 35 percent) despite his recent victory in Florida.

Trump, it should be remembered, is practically his own system within the Republican Party, and the possible incorporation of future Republican candidates (such as Florida Senator Marco Rubio or Texas Governor Greg Abbott), could dilute the figure of DeSantis in a whole diffuse list of "rivals" like those that the tycoon already eliminated without problems before coming to power.

At the moment, the Republican Party is more concerned with absorbing the result of the legislative elections and concentrating on its reinforced opposition against the White House. "The first thing DeSantis is thinking about right now is running Florida," Republican strategist Brett Doster told NPR, "because every political science student knows that a good career is built through a good government".