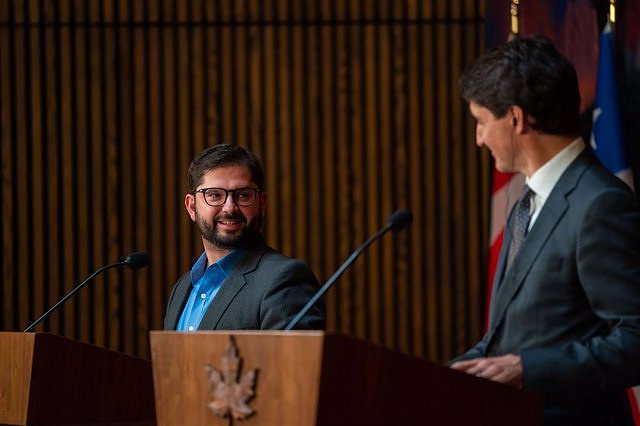 The President of Chile, Gabriel Boric, stated this Saturday that his Canadian counterpart, Justin Trudeau, has asked him for information on several Canadian companies that could be violating Chilean environmental legislation.

Both leaders have coincided on the occasion of the Asia-Pacific Economic Cooperation Meeting that is being held this week in Thailand (ACEP) and Boric has expressed that this is the example of what Chile asks its international shareholders to act as they would in their countries of origin.

Specifically, Trudeau has been interested in the demands expressed by some communities in northern Chile about the mining industry and its possible environmental repercussions, according to the Chilean newspaper 'La Tercera'.

The Canadian president has requested the background of a group of Canadian companies in this sector, which may be having violations or that "are not behaving according to the standard that he himself, as Prime Minister, has established that the behavior of the companies", which is to comply with the law, according to what Boric has transferred.

The Chilean president has confirmed that they held this conversation and has indicated that the country already maintains "a relationship of close trust" with the North American nation.

‹ ›
Keywords:
ChileCanada
Your comment has been forwarded to the administrator for approval.×
Warning! Will constitute a criminal offense, illegal, threatening, offensive, insulting and swearing, derogatory, defamatory, vulgar, pornographic, indecent, personality rights, damaging or similar nature in the nature of all kinds of financial content, legal, criminal and administrative responsibility for the content of the sender member / members are belong.
Related News