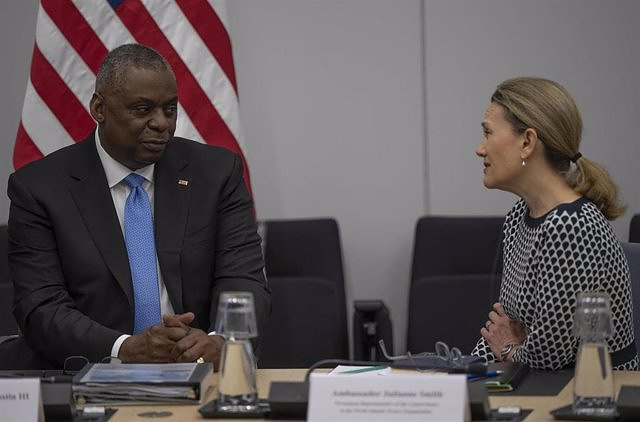 The United States ambassador to NATO, Julianne Smith, has assured this Wednesday that Russia is "ultimately responsible" for the impact of missiles in Poland, since the incident in which two Polish citizens have died in a border municipality is linked to the offensive against Ukrainian civilians.

"We all believe that ultimately Russia bears responsibility (for the incident) because regardless of where this investigation lands, none of this would have happened if Russia had not been firing attacks against civilians inside Ukraine," Smith said in a statement. to CNN after the emergency meeting of allied ambassadors at NATO headquarters.

The US representative has indicated that the "crystalline" message that comes out of the meeting is that the allies stand in solidarity with Warsaw and will continue to support Ukraine's right to defend its territory.

Faced with the alarms generated this Tuesday by the possible attack by Russia against a NATO ally, Smith has stressed that the meeting has passed "calmly" and "tranquility", since NATO has a significant presence on the eastern flank. , which has been nourished successively after the annexation of Crimea in 2014 and the recent invasion ordered by Vladimir Putin last February.

In his opinion, it is this military presence that guarantees that this type of incident does not happen again. As confirmed this Wednesday by the Secretary General of NATO, Jens Stoltenberg, after the meeting with the 30 allies, the preliminary analysis suggests that the missile that reached Poland was fired by the Ukrainian anti-aircraft defenses to repel a Russian attack.

Stoltenberg has ruled out the scenario of a Russian attack against a member of the Atlantic Alliance. "There are no indications that it was the result of a deliberate attack and we have no indication that Russia is preparing offensive military actions against NATO," he said.

Although the former Norwegian prime minister has denounced that this case is a "direct result" of Russia's war of aggression against Ukraine and occurred in the midst of a wave of attacks against Ukrainian cities. "This is not Ukraine's fault", he has insisted.

‹ ›
Keywords:
Estados UnidosPoloniaRusiaUcraniaOTAN
Your comment has been forwarded to the administrator for approval.×
Warning! Will constitute a criminal offense, illegal, threatening, offensive, insulting and swearing, derogatory, defamatory, vulgar, pornographic, indecent, personality rights, damaging or similar nature in the nature of all kinds of financial content, legal, criminal and administrative responsibility for the content of the sender member / members are belong.
Related News