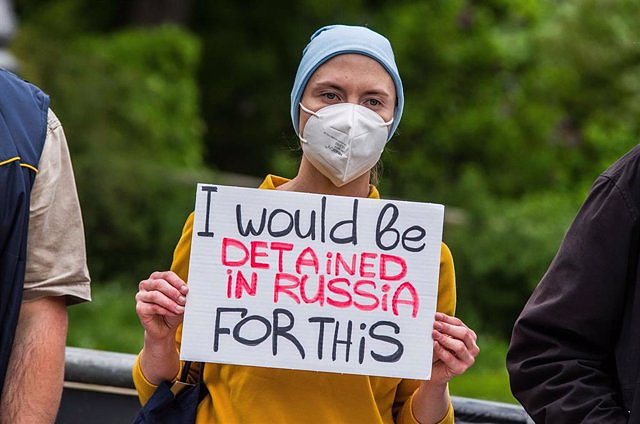 The NGO Amnesty International has regretted that, with the arrival of Vladimir Putin to the Presidency of Russia in the year 2000, the Eurasian country implemented a strict system of silencing and repression of protests and demonstrations against the Government and that now, with the Ukrainian war, seems to have reached new heights.

The organization has published this Thursday a report entitled 'Anyway, we are going to arrest you' in which it emphasizes that the Russian authorities have developed a "sophisticated system of restrictions and harsh reprisals" over the last few years to curtail the public protests that even involve the arrest of communication professionals.

After years of harassment of critical sectors and persecution of those journalists who gave voice to the protests, with the outbreak of the war in Ukraine, Russia has had to face new calls for demonstrations that have resulted in arbitrary arrests, excessive use of of force and high economic sanctions.

"The Russian authorities are determined not only to avoid at all costs and harshly sanction any protest, even if it is peaceful, but also to minimize any public awareness about them," said Amnesty International's Russia researcher Natalia Prilutskaya, who has put the focus on the situation in the country since February 2022.

Shortly after Putin announced the start of the invasion of his neighboring Ukraine, tens of thousands of people took to the streets of Russia's main cities, defying possible fines and imprisonment, to show their discontent against a decision that plunged their country in a conflict in which it would have the international community against it.

However, despite the courage on the part of the Russian citizenry, the authorities did not hesitate to apply "the harshest sanctions" against those who participated in the demonstrations, while the Police "made abusive use of force" against the journalists. and independent observers who tried to publicize what was happening.

At the same time, while from Moscow the demands on the media have been increased to be able to cover the events that are taking place in the country live, the Police, independently, have even gone so far as to demand from journalists "accreditation letters of your company" or your identity documents.

"Along with the harsh legal restrictions on press freedom already imposed by the State, the Police are acting increasingly arbitrarily to prevent journalists and other media personnel from informing public opinion about the protests," he denounced. Prilutskaya.

In addition, during the month of March the cases of journalists who have been accused of "spreading false information about the Armed Forces" have increased, as well as for the work of the Army in foreign territory, this second a new article included recently in the Russian Criminal Code.

Therefore, the persecution of journalists no longer occurs only when they cover demonstrations on the street, but also in the newsrooms themselves, communication professionals face possible arrests for disseminating information that the Kremlin considers "false". .

Under this legislation, the Russian authorities have directly targeted journalists, such as the case of the independent publication Vechernie Vedomisti and its director, Guzel Aitukova, who have been imposed economic sanctions amounting to 450,000 rubles -- more than 7,120 euros-- for disseminating photos of anti-war stickers.

Another prominent case is that of the Dovod media outlet, whose editor-in-chief, Kirill Ishutin, had his home searched by police for allegedly witnessing a criminal investigation into vandalism in connection with the appearance of anti-war street paintings. on a bridge in the city of Vladimir.

On the same date, the authorities also broke into the offices of the newspaper 'Pskovskaya Guberniya' to confiscate computers, mobile phones and other materials as part of a case on the crime of "discrediting" the Russian Armed Forces abroad. After this episode, the newspaper announced the temporary cessation of its activity.

This persecution has caused a kind of exodus of hundreds of journalists from Russia. Likewise, renowned media such as TV Rain or the newspaper 'Novaya Gazeta' have been forced to suspend their activity. The Ekho Moskvy radio station, known for giving voice to criticism of Putin, was also shut down by the authorities.

The precarious democratic and information conditions in Russia have been revealed internationally with the outbreak of the war, although it is true that years ago, with the imprisonment of opposition leader Alexei Navalni, this issue also gained notoriety.

In January 2021, the Russian population also took to the streets to denounce the imprisonment of a Navalni, sentenced to prison for violating the terms of probation imposed on him for a previous case of fraud. Navalni, a critic of Putin's government, was allegedly poisoned by Moscow with the Novichok nerve agent.

According to Prilutskaya, the Russian authorities already launched at that time their system of repression to deny the population all the information they need on the matter in an attempt to "erradicate any public expression of discontent." Those protests culminated in the arrest of at least 16 journalists, according to the Union of Journalists and Media Workers, suspended in September 2022.

Likewise, at least seven members of the NGO Committee against Torture were arbitrarily detained while they were carrying out work observing the protests. In many of these cases, the detainees were tried for "participating in an unauthorized public meeting" and sentenced to at least ten days of administrative detention.

In this context, Amnesty has called on the international community to carry out "thorough and effective scrutiny" of the situation and to ensure compliance with freedom of expression and information in Russia.

"In bleak times like these, it is essential to reach out a helping hand to Russia's beleaguered civil society and independent media to help those who carry out observation and information work in the country and let the world know of their existence," he said. remarked Prilutskaya.

For the AI ​​researcher on Russia, it will not be possible to put an end to the "terrible and widespread abuses", nor to the "aggression against Ukraine", while inside the Eurasian country some of the main rights and freedoms of people continue to be strangled. which the population should enjoy.

‹ ›
Keywords:
RusiaAmnistía InternacionalVladimir PutinUcrania
Your comment has been forwarded to the administrator for approval.×
Warning! Will constitute a criminal offense, illegal, threatening, offensive, insulting and swearing, derogatory, defamatory, vulgar, pornographic, indecent, personality rights, damaging or similar nature in the nature of all kinds of financial content, legal, criminal and administrative responsibility for the content of the sender member / members are belong.
Related News