The Syrian government launches a cholera vaccination campaign for more than 350,000 people in the north of the country 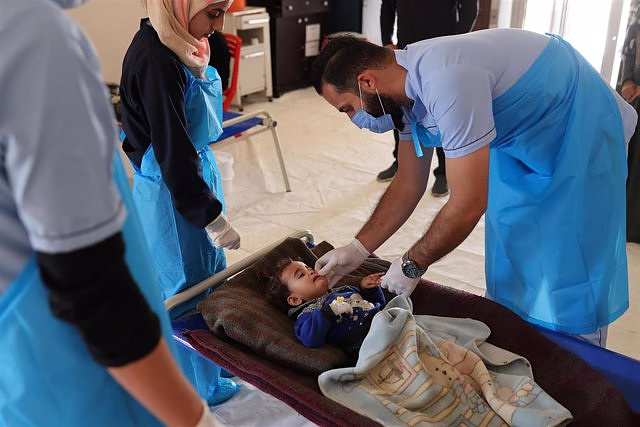 The Syrian Ministry of Health announced this Sunday the launch of a vaccination campaign in the north of the country to combat the cholera outbreak that has already left a hundred deaths and more than 35,000 suspected cases since the end of August, according to estimates from United Nations.

The campaign will be specifically aimed at the population of the suburbs of Aleppo, Hasaka, Raqqa and Deir Ezzor, and will run until the 15th of this month, the Ministry reported in a statement collected by the official Syrian news agency SANA.

The Ministry's director of primary health protection, Dr. Razan Tarabichi, specified that 2,269 health workers in 63 clinics and 685 mobile teams will participate in the campaign.

More than 350,000 people will be able to receive the vaccine in Aleppo Governorate alone, according to the local Health Director, Ziyad Haj Taha, particularly in the towns of Al Sfeira, Samaan and Azaz, where more than 50 mobile teams will participate.

‹ ›
Keywords:
SiriaOnuCólera
Your comment has been forwarded to the administrator for approval.×
Warning! Will constitute a criminal offense, illegal, threatening, offensive, insulting and swearing, derogatory, defamatory, vulgar, pornographic, indecent, personality rights, damaging or similar nature in the nature of all kinds of financial content, legal, criminal and administrative responsibility for the content of the sender member / members are belong.
Related News