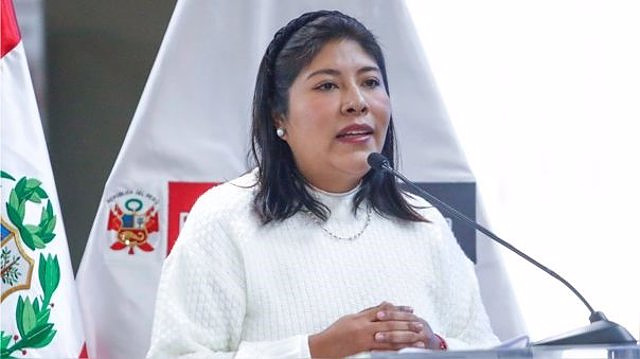 The Attorney General of Peru has opened a preliminary investigation against the Peruvian Minister of Culture, Betssy Chávez, for the alleged crimes of prohibited negotiations, prevarication and influence peddling.

As detailed by the Public Ministry in a statement, Chávez would have benefited relatives of the also congresswoman from Democratic Peru during his time at the head of the Ministry of Labor, the RPP radio station reported.

The investigation has been opened after the broadcast of a report broadcast over the weekend and in which the program 'Cuatro Poder', from América Televisión, reports on alleged irregularities detected in the hiring of two relatives of Abel Sotelo Villa, a merchant who is romantically linked to the head of Culture.

For this reason, the State Attorney General, Patricia Benavides, has ordered that the preliminary investigation be carried out within a period of 60 days.

After the opening of the case, the Minister of Culture has spoken out against the investigation, assuring that in the complaint made by the program Cuarto Poder there is no mention of "any objective element" that links it to an intervention "in some public contest or in an interference in an administrative process".

"It does not even mention any objective element that proves that I have been interested in any contest, bidding or similar or that I have interfered in any way in a judicial or administrative process, therefore, without the 'investigation' having any legal basis, I hope that it has the destination that corresponds to it," said the head of the Culture portfolio in a statement collected by 'Diario Correo'.

Likewise, the head of the Ministry of Culture has affirmed that she has not helped to benefit any close or distant relative of hers with contracts in the State.

"In the same way, all the hirings made in my congressional office have been duly filtered by the human resources offices of the Congress of the Republic and were framed in the law," he added.