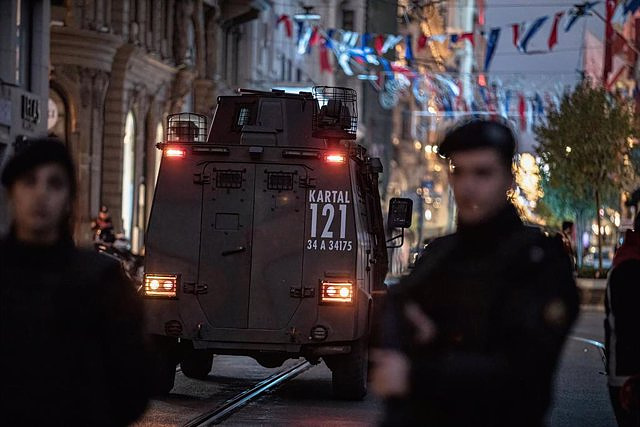 The Turkish Police have reported that the number of detainees has increased to 48 people in the framework of the bomb attack that occurred in Istanbul this Sunday in which six people died and 81 were injured.

Authorities have also seized nearly $4,000, €5,000 and 10,000 lire, as well as jewelry, from the house where the main suspect in the bomb attack was staying, who was arrested on Sunday night.

The teams of the Istanbul Police Department, in the early hours of Monday, arrested the woman suspected of having perpetrated the terrorist attack, as well as 21 other people.

Interior Minister Suleiman Soylu said that the Turkish authorities have determined that "the order for the deadly terrorist attack came from Ain al Arab, in northern Syria, where the People's Protection Units (YPG) have their headquarters," in reference to a prominent Syrian-Kurdish militia with ties to the PKK.

The spokesman for the Turkish Presidency, Fahrettin Altun, stated on Monday that the attacks "are a direct and indirect consequence of the support of some countries for terrorist groups", within the framework of the support for the Syrian Democratic Forces (FDS) and the alleged backing of Sweden and Finland to the Kurdistan Workers' Party (PKK).

"The international community must pay attention. The terrorist attacks against our civilians are a direct and indirect consequence of the support of some countries to terrorist groups," Altun said.

The Kurdistan Workers' Party (PKK) disassociated itself from the bomb attack on Monday, following accusations made by the Turkish government against the group, considered by Ankara to be a terrorist organization.

"First of all, we offer our condolences to the families of the victims and wish a speedy recovery to the injured. We had nothing to do with this incident and it is well known to the public that we do not directly attack civilians or condone actions directed against civilians," the People's Defense Center (HSM) Headquarters Command said in a statement.

Istanbul has been hit by several explosions in the past, including a suicide bombing in Istiklal in 2016 by a suspected member of the Islamic State jihadist group that killed five people.

In the same year, the PKK, considered by Turkey to be a terrorist organization, claimed responsibility for a bomb attack that killed 38 people outside a soccer stadium in the Besiktas area of ​​central Istanbul.

‹ ›
Keywords:
TurquíaTerrorismo
Your comment has been forwarded to the administrator for approval.×
Warning! Will constitute a criminal offense, illegal, threatening, offensive, insulting and swearing, derogatory, defamatory, vulgar, pornographic, indecent, personality rights, damaging or similar nature in the nature of all kinds of financial content, legal, criminal and administrative responsibility for the content of the sender member / members are belong.
Related News