The number of deaths from the Indonesian earthquake rises to 310 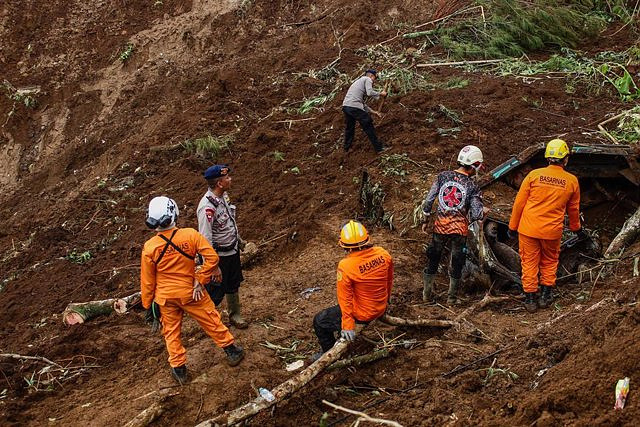 The number of deaths from Monday's earthquake in Indonesia has already risen to 310 after the discovery of 17 new bodies in the last hours, while 24 people are still missing, the spokesman for the National Disaster Management Agency ( BNPB), Lieutenant General Suharyanto in a statement picked up by the Indonesian affiliate of CNN.

The quake struck at 1:21 p.m. (local time), with its epicenter 10 kilometers south of Cianjur, according to the Indonesian National Meteorological, Geophysical and Climatological Agency (BMKG), which ruled out the risk of a tsunami. For its part, the BNPB confirmed that the quake had shaken the capital, Jakarta, with no casualties reported in the city.

Indonesian President Joko Widodo paid a visit to the affected area on Tuesday and stressed that "the evacuation and rescue process must be prioritized," while expressing his condolences to the victims of the earthquake. Likewise, he applauded that the work to unblock a road affected by a landslide on Monday has been successful, which will allow the expansion of rescue operations.

Widodo also revealed that the government will provide financial aid to help the victims, including funds for the restoration of damaged homes, according to the Indonesian state news agency, Antara. "The most important thing is that builders meet earthquake standards," he concluded.

‹ ›
Keywords:
IndonesiaTerremotos
Your comment has been forwarded to the administrator for approval.×
Warning! Will constitute a criminal offense, illegal, threatening, offensive, insulting and swearing, derogatory, defamatory, vulgar, pornographic, indecent, personality rights, damaging or similar nature in the nature of all kinds of financial content, legal, criminal and administrative responsibility for the content of the sender member / members are belong.
Related News