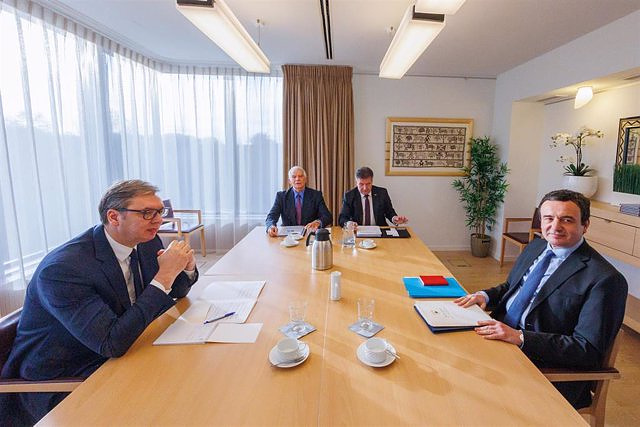 Serbia and Kosovo ended the high-level meeting organized in Brussels on Monday without an agreement, after Pristina rejected a proposal from the European Union to reach an agreement on the crisis over the controversial rule to impose Kosovar license plates on Serb communities

In a statement after the meeting, the EU High Representative for Foreign Policy, Josep Borrell, reported that the meeting between the Serbian President, Aleksandar Vucic, and the Kosovar Prime Minister, Albin Kurti, ended without a meeting after the Kosovar authorities have rejected the proposal put on the table by Brussels to solve the crisis, an initiative that Belgrade did support.

"After many hours, the two parties have not agreed on a solution today. For greater transparency I will say that I have put on the table a proposal to avoid the crisis that Vucic has accepted but Kurti has not," said the head of community diplomacy, regretting that both leaders must show leadership and commitment to the dialogue promoted by the EU to normalize their relations.

‹ ›
Keywords:
BruselasUEJosep BorrellBelgrado
Your comment has been forwarded to the administrator for approval.×
Warning! Will constitute a criminal offense, illegal, threatening, offensive, insulting and swearing, derogatory, defamatory, vulgar, pornographic, indecent, personality rights, damaging or similar nature in the nature of all kinds of financial content, legal, criminal and administrative responsibility for the content of the sender member / members are belong.
Related News