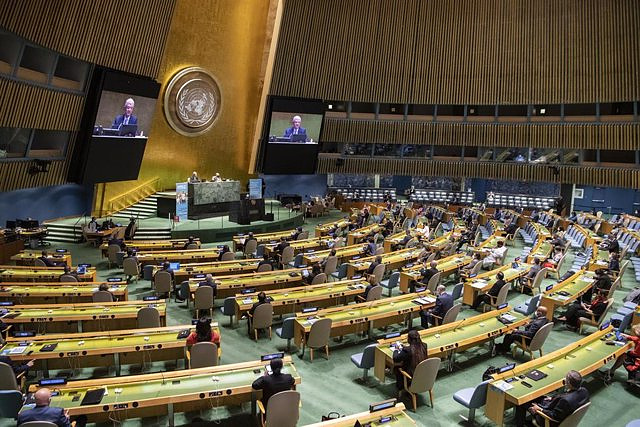 The Kremlin stressed on Tuesday that it "categorically" rejects the resolution approved by the United Nations General Assembly demanding that Moscow pay reparations for the invasion of Ukraine, unleashed on February 24.

"Naturally, the organizers of this process are trying to complete the theft of our gold reserves," said the spokesman for the Russian Presidency, Dimitri Peskov, who has denounced that these funds "have been illegally blocked" through sanctions.

"Currently, this theft is being formalized using the UN platform. This resolution is not legally binding (...) and we categorically reject it," he said, as reported by the Russian news agency Interfax.

Thus, he has emphasized that Russia "will do everything possible" to avoid the seizure of its funds and has highlighted that "during the last six months there has been an absolute violation of all the pillars and norms on private property and International Law".

"The methods of capturing the assailant prevail. We will take this into account when adopting our positions in the future," he said, before saying that Moscow "closely follows" the position of some allies who abstained on Monday during the vote in the UN General Assembly.

The vote ended with 94 votes in favor, fourteen against and 73 abstentions, after an initiative that calls for the creation of an international mechanism to compensate material and personal damage and keep a record of the evidence and claims against Russia for the invasion. from Ukraine.

The Ukrainian ambassador, Sergi Kislitsia, demanded that Russia be held accountable for the violation of International Law and defended that the proposal "is for the benefit of all those who are being threatened or may be threatened later with the use of force.

‹ ›
Keywords:
OnuUcrania
Your comment has been forwarded to the administrator for approval.×
Warning! Will constitute a criminal offense, illegal, threatening, offensive, insulting and swearing, derogatory, defamatory, vulgar, pornographic, indecent, personality rights, damaging or similar nature in the nature of all kinds of financial content, legal, criminal and administrative responsibility for the content of the sender member / members are belong.
Related News