The proclamation does not alter the process but introduces a detrimental time factor for researchers. 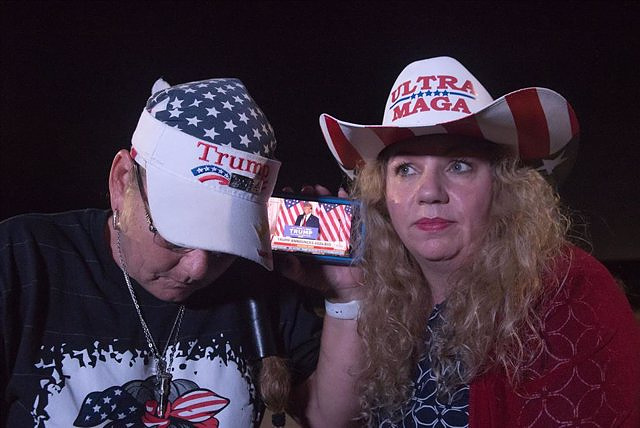 Donald Trump's new candidacy for the 2024 presidential elections is not going to change the essence of the procedures open against the ex-president, but it adds a component against time to the investigations that could end up playing in favor of the tycoon as key dates in the race for the nomination.

Right now there are three federal investigations open against Trump, on suspicion of appropriation of classified documents, attempt to forcibly overturn election results, and inciting insurrection, plus a state investigation in Georgia for alleged pressure to overturn the result of the presidential elections in this state and two other cases in New York against him and the Trump organization for fraud.

It must be remembered that Trump is not the first presidential candidate to run for the White House in these circumstances and the immediate precedent is his rival in the 2016 elections, former Secretary of State Hillary Clinton, who had to testify before Congress for the alleged misuse of a private server to send emails, before being exonerated.

Trump's personal lawyer, Alina Habba, has assured that the decision to appear has nothing to do with these investigations and that the former president "has done it for the country, period," as he explained on Wednesday in an interview with Newsmax, but Legal experts agree that, at the very least, Trump gets leeway to deal with them.

In the US, a politician can appear in an election even if he is being investigated and can also serve as long as there is no conviction in this regard -case, for example, of the Republican congressmen Chris Collins and Duncan Hunter in 2018-, but the formal accusation of Trump, due to his status as a presidential candidate, must come from a single person: the attorney general, in this case Merrick Garland, a figure demonized by conservative sectors as a former pretender of former President Barack Obama for the Supreme Court.

If Garland impeaches Trump, virtually all pundits take it for granted that the entire Republican Party will rise up to protest a "witch hunt." This could lead to the beginning of a counterattack by the new Republican majority in the House of Representatives in the form of questioning any member of the administration or even those responsible for investigating Trump, which is why in recent days it has been considered the introduction of an "independent prosecutor", finally completed this Saturday.

Garland has appointed Jack Smith as the person in charge of these investigations. Former chief prosecutor of the Special Court in The Hague, Smith was tasked with evaluating war crimes committed during the war in Kosovo, according to CNN.

This figure, however, could open the door to outright bureaucratic chaos, according to former Eastern Michigan District Attorney Barbara McQuade. "Because you impose a special prosecutor on anyone who runs for the White House, anyone under investigation can very well say that they are going to be a candidate for the White House," she explained to Bloomberg.

McQuade is convinced that Trump is aware that he can use the victimhood card from now on. "He can already point to any sequence of events as one of cause and effect, and argue that he can be part of a campaign to attack his candidacy," explains the former prosecutor.

Although the experts consulted by the US media coincide in recommending that the investigators forget about the announcement of Trump's candidacy for the moment, there are discrepancies when it comes to deciding which investigation is the most dangerous for the ex-president.

Former US Assistant Attorney General Donald Ayer views the investigation into allegations of election rigging as a priority. "The case of the documents is very serious for reasons of national security. It is more compact and less complex to prove. But the most important is that it directly accuses Trump of trying to steal the elections. It is impossible to underestimate what is at stake here " , explains to the British newspaper 'The Guardian'.

Other experts, such as the former head of Homeland Security Paul Rosenzweig, believe that the investigation into the alleged appropriation of classified documents should be a priority because there is a federal statute that typifies the disqualification from public office of those found guilty of concealing classified documents. "It seems to me the most important issue. First, because it is a matter of national security and second, because Congress has expressed itself on this issue in an impossible more explicit way," he told CNN.

Former federal prosecutor for New York Jennifer Rodgers believes that, in any case, Trump's candidacy has expedited proceedings. "If they're going to charge him," she explains to Bloomberg, "they can't wait past next spring, because what's going to happen from now on is going to be litigation and litigation, all the time."

The long legal battle that is looming raises the question about the ability of Trump's coffers to pay for legal processes that have been open against him practically since he left the White House.

Since then, the tycoon has paid a large part of the lawyers thanks to the funds of his Political Action Committee (PAC) Save America, created after his defeat in 2020. These PACs are fundraising organizations and are, regardless of the party, the object of deep suspicions due to the lack of regulation when it comes to defining who delivers the money, how much, and what it is used for.

While Trump was not a candidate, the tycoon could, for example, use the donations that his supporters delivered through this PAC for his personal expenses without any problem --a federal record indicates that he has raised more than 100 million euros in two years-- but the rules are stricter when the PAC beneficiary announces his candidacy for the Presidency.

Here comes another even more controversial organization such as the Super PAC, a committee specifically designed to cover campaign expenses. Trump has one: MAGA Inc., to which he could directly transfer funds without too many legal problems, in the opinion of Saurav Ghosh, director of the Centro Legal de Campaña civil association, which specializes in monitoring the US electoral protocol.

Ghosh recalls how, at one point, his organization asked the main regulatory body in this area, the Federal Electoral Commission, about the legality of a disbursement made to MAGA Inc. for a value of 20 million euros in October, a month before before Trump announced his candidacy, only to receive a slam and reproach from Trump's Super PAC, who defended the absolute validity of this transfer.

"We're trying to do something about it but most likely the case will go nowhere because the commission is made up of three Democrats and three Republicans," Ghosh told Business Insider. "Furthermore, in the particular case of Donald Trump, the commission has exhibited utter dysfunction and complete inability to enforce the law," he adds.

In any case, the Republican Party has been quick to ensure that Trump will not be able to dispose of the formation's coffers to defend himself against the accusations. "We do not pay the legal costs of any candidate," said the president of the Republican National Committee, Ronna McDaniel, to CNN, before acknowledging that they had provided Trump with some financial support after leaving the White House, as is the norm for any Republican former president.