The Government of Colombia and the ELN begin peace negotiations: "We hope not to fail" 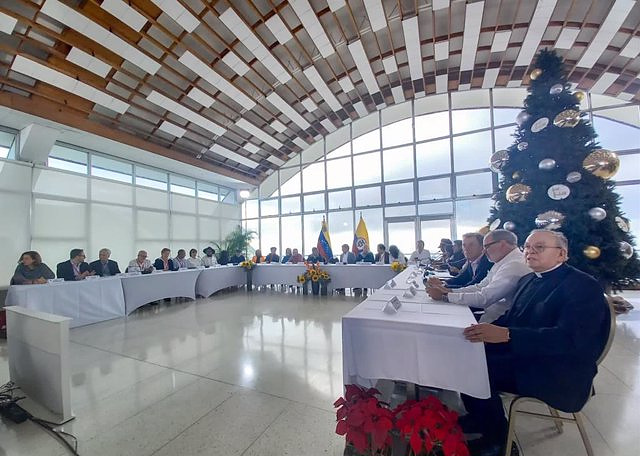 The Government of Colombia and the ELN guerrilla group officially began peace negotiations this Monday in the Venezuelan capital, Caracas, where delegates from Cuba and Norway, guarantor countries, attended.

The leader of the ELN, Pablo Beltrán, has assured that "this negotiating table must be an instrument of change." "We do not expect to fail that expectation of change," he has expressed.

"We aim for this table to be an instrument of change, we hope not to fail that expectation of change (...) Changes are not automatic, but we must all have a commitment to change, in this sense we are present in Venezuela with a ideal: Colombians cannot see ourselves as enemies," Beltrán stated, after reading a joint statement with the Executive.

"The work we have is reconciliation, to find common ground again, to build a nation with equity and peace, that is the commitment we have. That is why we came to this table. We hope to have a similar interlocutor with the delegation of the government", he added, as reported by the Colombian newspaper 'Semana'.

The guerrilla member has qualified that these negotiations are not "an exchange of favors", while he has explained that the "problem is Colombia", pointing out the high rates of poverty.

In addition, Beltrán has affirmed that he expects Washington to respect his country's desire for peace. "The United States is not here (in Venezuela), but we hope that it will follow up on this (the dialogue table), we hope that it will have a proactive attitude," he said.

Meanwhile, the High Commissioner for Peace in the country, Danilo Rueda, has indicated that there are signs of "harmony with the ELN peace delegation." "Our changes, those of the government's peace delegation, are real," he asserted.

"We cannot be less than the responsibility we have for present and future generations, for the memory of those who preceded us," he said, remarking the historical nature of the event.

The head of the United Nations Verification Mission in Colombia, Carlos Ruiz Massieu, has celebrated the restart of negotiations through a message on his profile on the social network Twitter.

"I reiterate the support of the Secretary General, António Guterres, for this process and I call on the parties and Colombian society to take advantage of this historic opportunity and deepen peace," he indicated.

For his part, the president of Venezuela, Nicolás Maduro, has considered that the start of the dialogue between the Executive and the guerrilla supposes "a great message of hope, faith and the dream of our Latin America and the Caribbean, of living in a world of peace and stability": "The time for peace has arrived", he assured.

‹ ›
Keywords:
VenezuelaColombiaNoruegaELN
Your comment has been forwarded to the administrator for approval.×
Warning! Will constitute a criminal offense, illegal, threatening, offensive, insulting and swearing, derogatory, defamatory, vulgar, pornographic, indecent, personality rights, damaging or similar nature in the nature of all kinds of financial content, legal, criminal and administrative responsibility for the content of the sender member / members are belong.
Related News