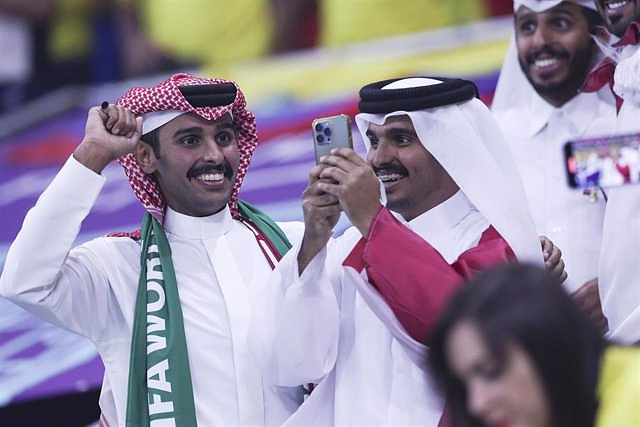 The European Commission has avoided this Monday denouncing the pressure of FIFA to veto the rainbow bracelets at the last minute in the World Cup in Qatar, under threat of expelling the players who wear it, and has limited itself to showing its support for the cause behind the initiative of eight European teams to support the LGTBIQ minority in Qatar.

At a press conference from Brussels, the Commission spokeswoman was asked about the issue of the special armbands that captains of eight teams, England, the Netherlands, Belgium, Switzerland, Wales, France, Denmark and Germany, wanted to wear during the competition as signal "against discrimination and in favor of diversity" and that FIFA has suggested that it may lead to sanctions against footballers who wear them.

"We cannot make a statement, we do not have powers over this, but we can say that the meaning behind the rainbow bracelets is very important, it is something recognized by Europeans and the rest of the world," said community spokesperson Dana Spinant.

During his visit to Qatar, the Greek commissioner highlighted the country as the first Arab country and the smallest to host a soccer World Cup and that it has complied with the reforms and deserves global success. "The European sports model is an inspiration for everyone," he said.

Along the same lines, the EU Foreign Affairs spokesman, Peter Stano, has pointed out that Qatar is the first country in the region to set a minimum wage for migrants and the first to abandon the 'kafala' system, a sponsorship mechanism of migrants that gives private companies almost total control over the employment and immigration status of migrant workers.

Stano has insisted that Qatar must, yes, continue working to address challenges such as improving the living conditions of migrants, their access to justice, to decent wages and that there is an effective labor inspection. In this sense, he has appreciated that the EU has the forums and platforms to follow up on these issues and contact the authorities of the Gulf country.

‹ ›
Keywords:
Comisión EuropeaFifaColectivo LGBTQatarUE
Your comment has been forwarded to the administrator for approval.×
Warning! Will constitute a criminal offense, illegal, threatening, offensive, insulting and swearing, derogatory, defamatory, vulgar, pornographic, indecent, personality rights, damaging or similar nature in the nature of all kinds of financial content, legal, criminal and administrative responsibility for the content of the sender member / members are belong.
Related News