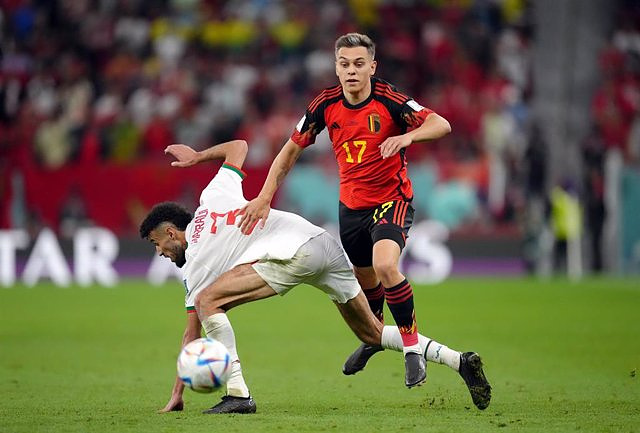 The Brussels Police has been forced to intervene this Sunday to contain disturbances that occurred during the match that the national teams of Belgium and Morocco have played in the World Cup in Qatar, and which has resulted in the victory of the Alaouite team (2-0 ).

"The situation is normalizing but the Police continue to be mobilized. Thanks to the unity of command and cooperation of the Police, we have contained the incidents to a single street," said the mayor of Brussels, Philippe Close, on his Twitter account.

"Once again, I strongly condemn the acts committed by these scoundrels, who will always find themselves face to face with the Brussels Police," he added.

A hundred policemen, armed with water cannons, had to intervene against the sympathizers, who destroyed street furniture and threw projectiles at the agents, as reported by the local spokeswoman for the Brussels-Capital/Ixelles Police, Ilse Van de Keere, to the official Belgian news agency.

"There was use of pyrotechnic material, the launching of projectiles, the use of sticks, fire on public roads, in particular a container at the intersection of Boulevard Lemonnier and Rue de Woeringen," he explained. At least one journalist has been injured by fireworks.

A correspondent for the French newspaper 'Le Monde' has identified "dozens of young people, sometimes masked, some with the Moroccan flag, who gathered at the start of the second half in the Gare du Midi district."

The country's Prime Minister Alexander De Croo condemned the riots. "Football should be a party", he has declared on his return from his tour of Ukraine.

The Minister of the Interior, Annelies Verlinden, regretted that "it is sad to see how some take advantage of the situation to provoke a riot", before thanking the Police for their work. "They are doing everything they can to end" the violence "and will do everything they can to identify the rioters in the coming days," she said.

‹ ›
Keywords:
BruselasMarruecosQatarBélgica
Your comment has been forwarded to the administrator for approval.×
Warning! Will constitute a criminal offense, illegal, threatening, offensive, insulting and swearing, derogatory, defamatory, vulgar, pornographic, indecent, personality rights, damaging or similar nature in the nature of all kinds of financial content, legal, criminal and administrative responsibility for the content of the sender member / members are belong.
Related News