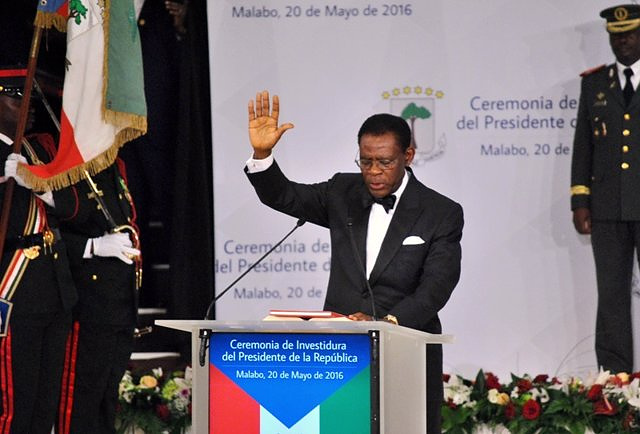 The President of Equatorial Guinea, Teodoro Obiang Nguema Mbasogo, has cast his vote in the general elections that are being held this Sunday in the African country over which he has held total hegemony for more than 40 years.

The president voted at around 10:00 in the morning with his wife, Constancia Mangue Nsue Okomo de Obiang, at the Equatoguinean Academy of the Spanish Language in the capital, Malabo.

After voting, the leader of the Democratic Party of Equatorial Guinea (PDGE) has indicated that the victory of his party, with five terms in power, is assured.

"What one sows is what one reaps, I am sure that the victory belongs to the PDGE. We have presented the program to develop the country. The party has sown a lot and the people have to continue believing and voting for the PDGE," he declared in comments collected by the AhoraEG portal.

Obiang, 80 years old and the president who has been in power for the longest time in the world, has led the country since the coup against his uncle, Francisco Macías Nguema, who became the first president of Equatorial Guinea in 1968 after the country's independence. from Spain.

The Equatoguinean president announced that the presidential elections would be brought forward five months to make them coincide with the legislative and municipal elections, amid opposition complaints about repression and exclusion from the Equatoguinean political system.

Despite the fact that there are 18 legalized parties in the country, in practice there are no opponents with a real chance of removing Obiang from power, amid speculation about the possibility of a "dynastic" succession that would lead to the rise of his son, Teodoro Nguema Obiang Mangue, known as 'Teodorín', who has held the Vice Presidency since 2016.

‹ ›
Keywords:
Guinea Ecuatorial
Your comment has been forwarded to the administrator for approval.×
Warning! Will constitute a criminal offense, illegal, threatening, offensive, insulting and swearing, derogatory, defamatory, vulgar, pornographic, indecent, personality rights, damaging or similar nature in the nature of all kinds of financial content, legal, criminal and administrative responsibility for the content of the sender member / members are belong.
Related News