Slovenia elects a woman as president for the first time 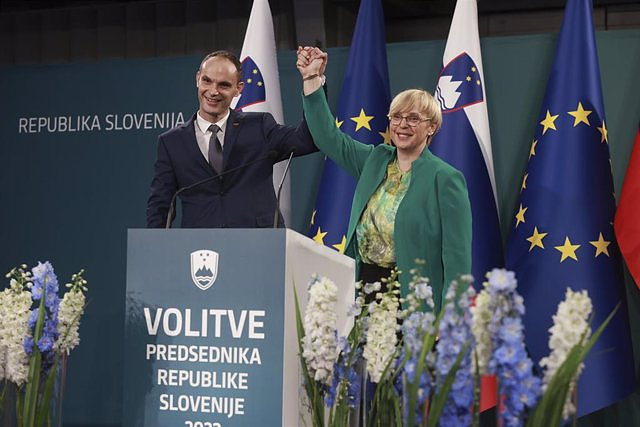 The lawyer Natasa Pirc Musar has been elected president of the country this Sunday with 53.97 percent of the votes in the second round of the elections, according to official data from the Slovenian Electoral Commission, quoted by public television RTV Slo.

His rival, Anze Logar, a former ally of former right-wing prime minister Janez Jansa and former foreign minister, has finally achieved 46.03 percent support. There are still votes to be counted, but there is no mathematical option that the result will change.

Logar has already "sincerely" congratulated Pirc Musar and has been sure that she will be the president of all Slovenians. He has thanked the votes received and has called for unity and cooperation.

Pirc Musar will succeed President Borut Pahor for the next five years, thus becoming the country's first female head of state. Her inauguration is scheduled for December 22. Pirc Musar has also been the head of the Slovenian Information Watchdog and campaigned for LGBTQ rights.

In his law practice, Pirc Musar, 54, has worked for former US first lady Melania Trump, born in Slovenia and a citizen there, when she sued a tabloid in a libel case that settled for an undisclosed amount. Pirc Musa was also part of the team hired to protect the legal and trademark interests of Melania Trump.

Pirc Musar's victory extends the unbroken string of presidential victories by left-wing candidates dating back to the formation of the Balkan state in 1991. It also marks a boost for Prime Minister Robert Golob, who took power after general elections in this year with the promise of reversing the radical changes pushed by Janez Jansa, who gave his allies greater influence in the courts and state media.

While the president is commander-in-chief of the military and appoints constitutional judges, central bank governors and high-ranking diplomats, the role is largely ceremonial. Most decisions are ultimately made by the Prime Minister and his cabinet and approved by Parliament.

‹ ›
Keywords:
Eslovenia
Your comment has been forwarded to the administrator for approval.×
Warning! Will constitute a criminal offense, illegal, threatening, offensive, insulting and swearing, derogatory, defamatory, vulgar, pornographic, indecent, personality rights, damaging or similar nature in the nature of all kinds of financial content, legal, criminal and administrative responsibility for the content of the sender member / members are belong.
Related News