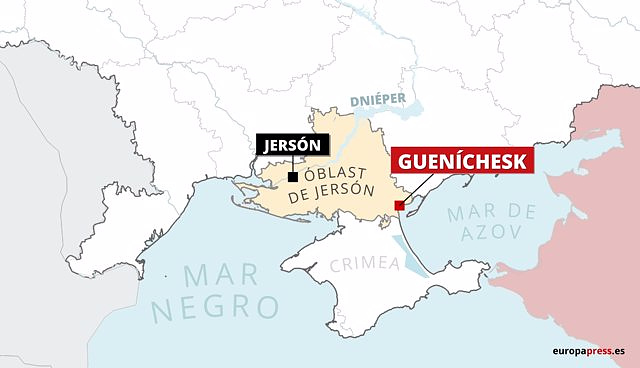 Pro-Russian authorities in the Kershon region in eastern Ukraine have declared the city of Gueníchesk as the new "temporary administrative capital" of the Ukrainian territory, occupied and annexed by Moscow.

This decision takes place after the withdrawal in recent days of the Russian military from the capital Kherson, on the banks of the Dnieper River, which has been liberated by Ukrainian forces.

Gueníchesk lies at the eastern end of Jerson, on the shores of the Sea of ​​Azov and approximately 20 kilometers north of the border with the Crimean peninsula, also annexed by Russia and whose incorporation was ratified in 2014 in a considered referendum, like that of Jerson, as illegal by Ukraine and its allies.

"Currently, the temporary administrative capital of Jerson province is Gueníchesk. All the main authorities are concentrated there," the representative of the pro-Russian administration of Jerson, Alexander Fomin, has confirmed to the Russian news agency TASS.

The city of Genichesk, a major seaport and tourist hub in the area, came under Russian control on February 27, three days after its invasion of Ukraine.