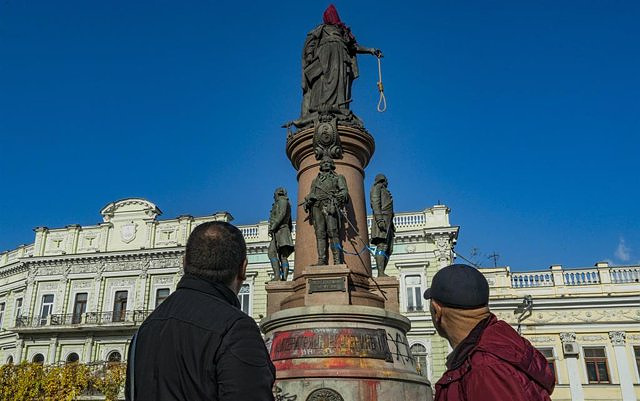 The Odesa City Council has voted in favor this Wednesday of removing and relocating to another space the statue of the Russian Empress Catherine II, which in recent months had been vandalized on several occasions, and which the Ukrainian president, Volodimir Zelenski, has already proposed demolishing. .

The statue is located in the center of the small Ekaterininskaya square, and is part of a monument in which there are other smaller sculptures of those considered to be the founders of the city, such as José de Ribas or Grigory Potemkin.

In recent months, the monument had been protected under a seven-meter-high fence because it had been vandalized on several occasions, even throwing red paint at it or dressing the sculpture of Catherine II with an executioner's cap and placing a rope on it. in one of his hands.

During her reign, Catherine II promoted the immigration of Germans to Odessa, a city that she turned into one of the main Russian trading ports on the Black Sea, serving as a center of grain and cereal trade in the 19th century.

In turn, the City Council has also decided to dismantle and move to another place the monument of the Russian commander Alexander Suvorov, in line with the measures that have been taking place in various former republics of the Soviet Union, which have hastened to remove everything that remind them of their Russian past in retaliation for the war started by Moscow in the Ukraine.