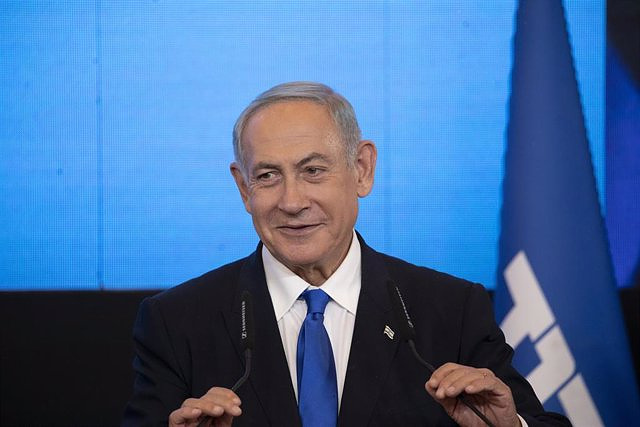 The President of Israel, Isaac Herzog, will deliver this Sunday to former Prime Minister Benjamin Netanyahu the mandate to form the new Government, once the consultation process has been completed after the early legislative elections held on November 1.

Herzog already announced before the start of the consultations that he hoped to deliver the mandate during the day on Sunday, with the Likud leader as the great favorite after his bloc won the majority of the seats in the Knesset.

Thus, a total of 64 parliamentarians have recommended 'Bibi' to the position of prime minister, for the 28 who have shown their support for the leader of Yesh Atid and current prime minister, Yair Lapid, according to the newspaper 'The Jerusalem Post' .

In this way, Netanyahu has received the support of Likud, Shas, United Torah Judaism, Religious Zionism, Otzma Yehudiy and Noam, which will allow him to form a coalition of right-wing, far-right and ultra-Orthodox parties.

Lapid has only had the support of his party and the Labor Party, while the United National Party, Yisrael Beitenu, and the Arabs of Raam and Hadash-Taal have avoided recommending any of the parliamentarians who will make up the next Knesset.

From the moment the president gives Netanyahu the mandate to form a government, he will have 28 days to assemble the new Executive. If he doesn't succeed, he could give him a fourteen-day extension, after which he would have to decide whether to leave the task in his hands, entrust it to someone else, or call new elections.

The consultation process has been marked by some statements by Herzog captured by an open microphone in which he stated that "everyone is anxious" about the possibility that the leader of the far-right Otzma Yehudit, Itamar Ben Gvir, will acquire a portfolio in the Executive.

The Israeli president on Thursday conveyed these concerns to Ben Gvir himself, telling him that he has "a certain image that worries in many places about the treatment of Arabs in the state and in the region." "World leaders ask questions," he stressed.

"I am asked in the Muslim world about the Temple Mount. This is a sensitive issue," Herzog said, referring to the Esplanade of the Mosques by the name by which Jews know the place, as reported by the newspaper. The Times of Israel'.

In response, Ben Gvir said he "doesn't treat the Arabs like a monolith," although he stressed that "there must be order." "We are not saying that the Temple Mount is not sacred to others, but we have to remember that it is our heart and our history. We are against racism and you cannot tell a Jew that he cannot go because he is a Jew. I am for the equal rights," he settled.

Ben Gvir has been accused in the past of inciting violence and stirring up tensions with the Palestinians. The parliamentarian has made numerous visits to the Esplanade of the Mosques and supports that Jews can pray in the place, something prohibited at the moment.

In the event of being appointed Minister of Public Security, Ben Gvir would be in charge of security operations in the Esplanade of the Mosques, located in the Old City of Jerusalem and epicenter of the tensions of recent months between Israelis and Palestinians, who are protesting against violations of the 'status quo' on the ground.

Also in the last few hours, doubts have arisen about the role that the leader of Religious Zionism, Bezazel Smotrich, who would have requested the Defense portfolio, will play, according to Kan News sources. However, other sources point to the media that Netanyahu would be more inclined to award the Ministry to someone from his Likud party and propose the Treasury office to Smotrich instead.

Shas leader Aryeh Deri, who has reportedly been considered for the Finance Ministry, is now likely to get the Home Ministry, which he headed in the past, according to Channel 12 and 'Yedioth Aharonoth' sources. The Shas party would also receive the Ministry of Religious Affairs.