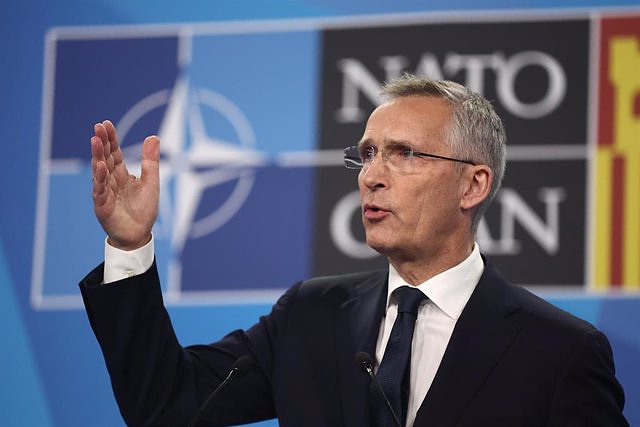 NATO will ask its members to supply more anti-aircraft aid to Ukraine to curb the "brutality" of Russian President Vladimir Putin amid a wave of Russian attacks on civilian infrastructure in the neighboring country.

In the framework of the meeting of allied foreign ministers in Bucharest, Romania, the organization will ask the allies for more lethal and non-lethal military aid. "NATO will continue to support Ukraine for as long as necessary. We will not back down. I thank the Allies for their contributions and at our meeting in Bucharest, I will ask for more," Secretary General Jens Stoltenberg said at the previous press conference. to the meeting.

The former Norwegian prime minister has stressed that there will be no lasting peace if the aggressor wins and has insisted that if Putin wins, the allies "will pay a higher price for many years." "Most wars end in negotiations but what happens at the negotiating table depends on what happens on the battlefield. The best way to increase your chances of a peaceful solution is to support Ukraine," he said.

Sweden and Finland will sit at the meeting as guests, when the ratification of their entry into NATO is pending the approval of Hungary and Turkey.

"It is time to finalize their accession process and welcome them as full members of the alliance. It will make us safer and our alliance stronger and the Euro-Atlantic area safer," Stoltenberg defended.

In addition, the allied foreign ministers will open a debate on the threat posed by China, an actor that NATO continues to regard with suspicion due to its aggressive attitude and the modernization of its military means, although it does not consider it an "adversary".

In this sense, Stoltenberg has asked to analyze the dependencies generated with Beijing and guarantee that this does not become a weakness, as has happened with Russia in energy matters. The war in Ukraine has demonstrated our dangerous dependence on Russian gas. Therefore, we must assess our dependencies on other authoritarian regimes, including China," he stressed.

The former Norwegian prime minister has emphasized the growing Chinese presence on the international scene, "from the Arctic to the Balkans" and has warned of his intention to control critical infrastructures in NATO countries, such as the case of the Chinese acquisition of shares in a terminal in the port of Hamburg.

‹ ›
Keywords:
RusiaVladimir PutinUcraniaOTAN
Your comment has been forwarded to the administrator for approval.×
Warning! Will constitute a criminal offense, illegal, threatening, offensive, insulting and swearing, derogatory, defamatory, vulgar, pornographic, indecent, personality rights, damaging or similar nature in the nature of all kinds of financial content, legal, criminal and administrative responsibility for the content of the sender member / members are belong.
Related News