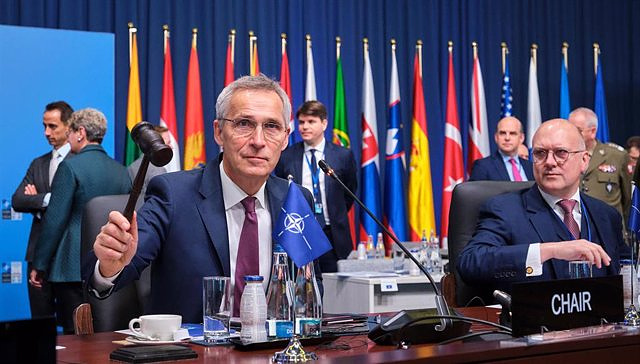 The NATO member countries have discussed their relations with China this Wednesday, in a debate in which they have stressed that Beijing "is not an adversary" for the allies, but in which they have warned of possible economic and technological dependencies with the asian giant.

"The war in Ukraine has demonstrated our dangerous dependence on Russian gas. This should also lead us to assess our dependencies on other authoritarian regimes, including China, with regard to our supply chains, technology or infrastructure," said the secretary. NATO General Jens Stoltenberg after the NATO Foreign Ministers meeting in Bucharest, Romania.

In this sense, the former Norwegian prime minister has stated that the allies recognize the long-term challenges that China poses but will continue to have an economic and commercial relationship with Beijing. Of course, they must be "aware" of the dependencies that are generated, said Stoltenberg, who has asked to reduce vulnerabilities and better manage risks.

NATO has stressed its doctrine agreed at the Madrid summit last June to underline that it does not see China as an "adversary" but, at the same time, send a warning message about Beijing's "ambitious military development" and its advances in technology and cyber activities.

"We will continue to interact with China when it is in our interest. Not least to convey our united position on Russia's illegal war in Ukraine, so we remain with our eyes open," Stoltenberg stressed.

This message from the political chief of NATO comes in full reflection of the European Union on its relationship with China, after the European leaders held a strategic debate last October in which they hardened their tone with respect to Beijing and called to remain vigilant with respect to economic dependencies.

Along the same lines, the EU High Representative for Foreign Policy, Josep Borrell, called for realism in a recent intervention in the European Parliament, in which he defended contact with Beijing and pointed out that "decoupling is not an option".

Borrell has been stressing that the European block be alert so that the commercial dependencies that mark the relationship now do not become "vulnerabilities" in the future, as has happened with Russia in the energy field.

‹ ›
Keywords:
ChinaOTAN
Your comment has been forwarded to the administrator for approval.×
Warning! Will constitute a criminal offense, illegal, threatening, offensive, insulting and swearing, derogatory, defamatory, vulgar, pornographic, indecent, personality rights, damaging or similar nature in the nature of all kinds of financial content, legal, criminal and administrative responsibility for the content of the sender member / members are belong.
Related News