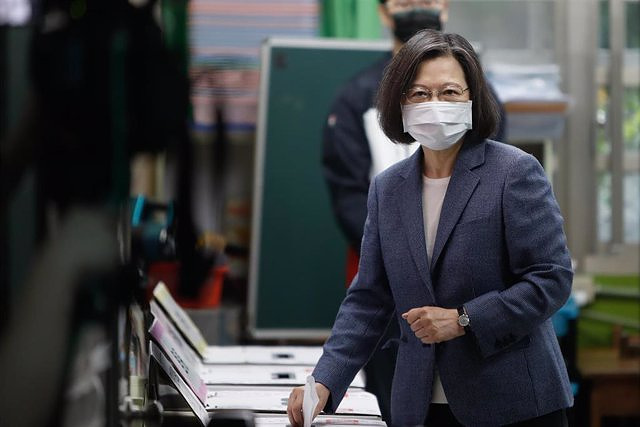 More than 19 million people, of whom 760,000 will vote for the first time, are called to participate in Taiwan's local elections this Saturday, in which the reduction of the minimum voting age from 20 to 20 is also submitted to a referendum. 18 years.

The polls have opened at 8:00 a.m. (local time) on an election day in which up to 11,000 positions are chosen in all the country's municipalities, as reported by the Taiwanese agency CNA.

According to the Central Election Commission (CEC), there are more than 17,649 polling stations open across the country staffed by some 300,000 electoral affairs employees.

However, some people will face significant obstacles to getting to the polls, especially after the Central Epidemic Command Center (CECC) announced fines of up to 62,000 euros for those infected with COVID-19 who break the mandatory quarantine to vote in person at a polling station.

As detailed by the aforementioned agency, Taiwan currently does not allow voting by mail or the like, which means that people with coronavirus are strictly prohibited from voting. The CECC has estimated that some 65,000 people will not be able to vote.

At stake in Saturday's elections are the mayors of Taiwan's six largest cities: Taipei, New Taipei, Taoyuan, Taichung, Tainan and Kaohsiung, as well as mayors and magistrates in 15 other cities and counties across the country.

In Taiwan's capital Taipei, Democratic Progressive Party candidate Chen Shih Chung, who previously headed the Ministry of Health and Welfare during the COVID-19 pandemic, faces off against Chiang Wang An of the Chinese Nationalist Party. In addition, Ko Wen Je, of the People's Party, and Huang Shan Shan, an independent candidate, will also compete for mayor of the capital, according to CNA.

Along with the municipal elections, a referendum is held on lowering the legal age for voting and for running for public office to 18 years.

If the referendum passes, an amendment to Taiwan's constitution will be required to lower the voting age to 18, a process that will take place for the first time as a result of a referendum.

The threshold for approval of the referendum is a 'Yes' vote of at least 50 percent of the 19.24 million voters called to participate in the vote.