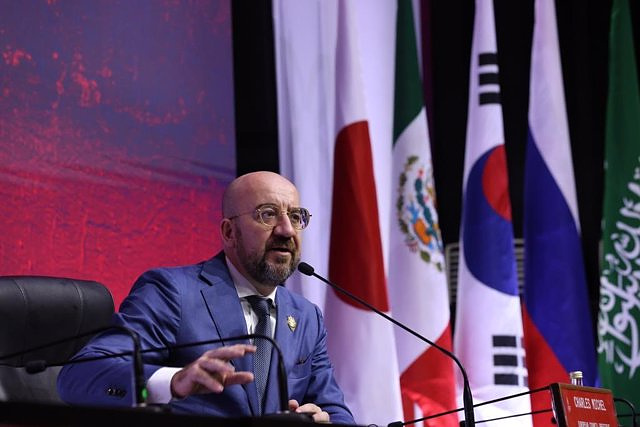 The president of the European Council, Charles Michel, has assured this Tuesday on the eve of the G20 summit in Bali, in Indonesia, that the Kremlin has decided to turn "food into weapons" exacerbating hunger, poverty and instability.

Listing the issues on which he expects the G20 leaders to discuss during the summit, Michel maintained that there will be time to address "the great challenge of food security", which would have been aggravated after the Russian invasion of Ukraine, as reported by the European Council in a statement.

"The Kremlin has decided to weaponize food, increasing hunger, poverty and instability. It is also having dramatic global consequences in the developing world, including right here in Asia. And let me be clear, I repeat once again, the EU sanctions taken against Russia do not target agriculture and food products and do not target the export of fertilizers from Russia," Michel said in a statement to the media.

In this sense, the president of the European Council has pointed to Russia for imposing export restrictions on its own food even before the war broke out, a fact against which the Union is working "hard" by mobilizing funds of 8,000 million euros .

He also recalled that, before the war, Ukraine exported 45,000 million tons of agricultural products to the world and that, thanks to the help of the Twenty-seven, Ukraine has managed to export 15 million tons plus an additional 10 million thanks to the Initiative of grains from the Black Sea.

However, Michel has underlined the importance of another of the key issues that he hopes will be addressed at the G20 summit: the energy crisis.

"The energy crisis hurts families, raises costs for businesses and destabilizes energy markets globally. As the G20, we have the collective power, but also the collective responsibility, to help ensure the world has sustainable, safe energy and affordable for all", he stressed, according to the letter from the European Council.

He has also recognized that for years the European Union has based its green energy transition strategy on a "reliable and affordable" gas, although now the Member States must "adapt that strategy".

"We are grateful to those partners who have helped us secure urgent supplies, but prices must be affordable and we must implement concrete measures. In the EU, we are phasing out our dependence on Russian energy. We are diversifying our energy sources. We are accelerating renewable energies and reinforcing our energy efficiency", he added.

Meanwhile, Michel has made reference to the two years of COVID-19, calling on the international community to sign a "pandemic treaty" to learn from the lessons of the coronavirus.

According to the president of the European Council, the negotiations of this treaty "are another concrete demonstration of a great multilateralism anchored in solidarity, transparency and global coordination".