Maduro receives the presidential letters from the Spanish ambassador in Caracas 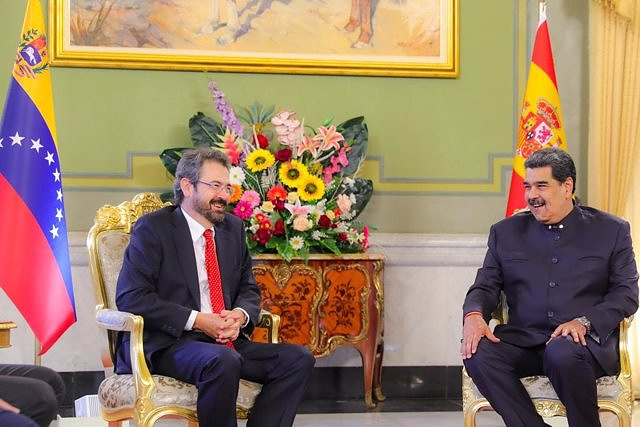 The Venezuelan president, Nicolás Maduro, received on Tuesday the credentials of the ambassador designated by Spain to Venezuela, Ramón Santos Martínez, in an effort to reestablish diplomatic relations between the two countries.

"I received the letters of credence from the designated ambassador of the Kingdom of Spain to Venezuela, Ramón Santos Martínez. We continue to strengthen and deepen ties of cooperation and respect. Let's keep moving forward!" the Venezuelan president said in a message on the social network Twitter.

The meeting seeks to restore diplomatic relations, as well as cooperation and understanding between the two countries. With the appointment of the ambassador, Spain recognizes the Executive headed by Maduro, who in recent weeks has begun a dialogue process with the opposition.

Santos, who was appointed on December 27, will thus become the highest representative of Spain in Venezuela, since the departure of Jesús Silva as ambassador in November 2020 when the Government chose to lower the relationship to the level of charge d'affaires as shows their disagreement with the situation in the country.

A career diplomat, Santos has been ambassador in Panama between 2015 and 2019 and in Bolivia between 2008 and 2012. In addition, he has been assigned to the Embassy in the United States and the Spanish Representation to the EU, among others.